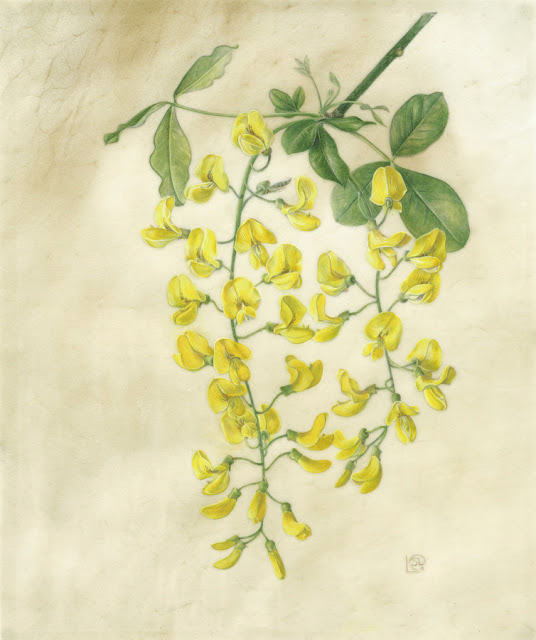 Byclare McSharry
brushes, Challenges, composition, deadlines, Painting Laburnum anagyroides, palette, studio set-up, vellum
1
“Start where you are. Use what you have. Do what you can.”
Arthur Ashe
Sometimes we sail through life like a ship on a calm sea, and at other times, everything seems to come at once- a veritable maelstrom of appointments, deadlines, exams, exhibitions and meetings. I’ve been channelling my inner Wonder Woman recently, and rather than allowing everything to overwhelm me, facing my challenges one at a time.
I can do this!
Right at the top of my To-do list has been the laburnum. Not only did I have a deadline that was looming with ever increasing urgency, but the flowers were blooming and finishing before my eyes! 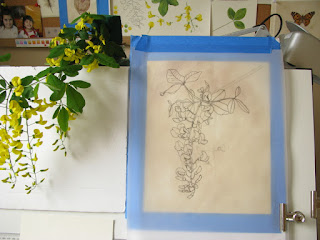 Often when I start a botanical painting, I check on a website called www.plantillustrations.org to see how botanical illustrators of the past have dealt with issues like composition. I suppose alarm bells should have started to ring because despite the popularity of the lovely Laburnum, there were very few images on the site. I soon found out why… the laburnum is not an easy plant to paint!
In fact, I think the laburnum has been one of the most challenging of all my paintings so far!
ARRANGING YOUR SUBJECT
It is the role of a botanical artist to tell the story of the plant, of how it looks and how it grows.
The laburnum flowers hang in pendulous racemes (clusters of flowers) from the tree, so I had to find a way to recreate the way that they hang in my studio. Frustratingly, I found that the flowers have to be kept in water or else they droop with alarming speed. Even when they were put in water, they would only last a day. I became increasingly inventive over ways to hang my flowers.
A test tube, floral oases, jam jars, blue tack, and a very handy Third Hand Tool became my studio essentials!
COMPOSITION
I’ve often been asked why I simply don’t paint photographs, but I just find it easier to paint from life. Fortunately I had a plentiful supply of laburnum flowers. However because I was changing my raceme of flowers almost every day, I had to constantly redraw the composition. I started with a basic drawing which was my template. 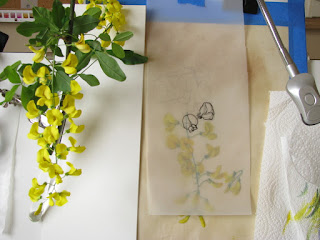 Then each day I would match up fresh flowers, paying particular care to the arrangement of the pedicels(flower stalks) on the stem. Using tracing paper, I would draw out the flowers that were to be painted that day using tracing paper. By the time I had finished, I had amassed quite a large pile of tracing paper drawings!! 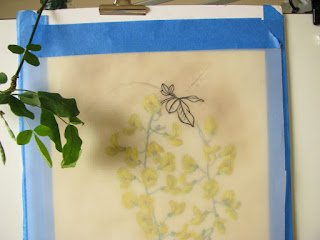 SUPPORT
I had a beautiful piece of natural calf vellum that I really wanted to paint on. It was a lovely golden tan colour with dark markings that would show off the golden yellow of the flowers. However the yellows that I had carefully selected when doing my earlier studies were completely lost against this darker ground. They simply disappeared and totally lacked the “oomph” that I wanted. So I had to completely change my palette and switch from transparent watercolours to opaques as a base.
One advantage of using vellum though is the ease in which mistakes can be wiped off, but it meant that progress was slow.
PALETTE 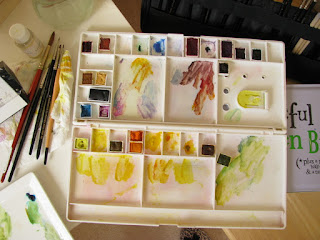 Ah! I thought I had it all worked out a few weeks ago when I did my studies, but alas no! My first few flowers ended up being a mucky overpainted yellow mess whilst I struggled to find a method that worked. After about 30 flowers I was feeling a bit more confident.
Despite my large array of yellows, I ended up using just a few. For the base I used white gouache which mixed with lemon yellow (which is quite an opaque yellow), followed by Cobalt violet and Verditer blue (Daniel Smith) for the shadows. Once this base was dry, I floated over transparent colours- winsor lemon and winsor yellow, new gamboge. The trick is to not disturb the underlying layers. Quin violet, Light red, Indanthrene blue and Perylene green were also on the palette. 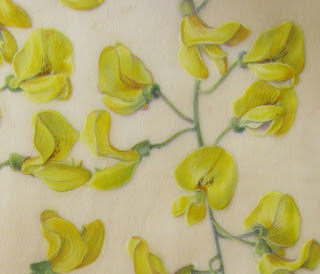 BRUSHES
Having tried and tested quite a few brushes, I have to say that Winsor & Newton Series 7 short sables are by far my favourites, although the Rosemary & Co make great brushes too. Vellum is brutal on brushes, and the gouache just seems to speed up their demise into hairless stubbles. I went through three brushes on this painting, something that I really need to factor into the costs. Still the thought of ordering new brushes is definitely the carrot that gets me through! I see that Rosemary & Co have a new range of sables which look very tempting! 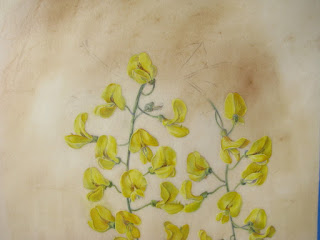 Despite the challenges that faced me, I managed to get this done (and everything else) before the deadline. My poor tree had definitely seen better days by the end of the painting as I ended up stripping it of most of it’s lower branches, and (ahem!!) those of a nearby tree. As a friend of mine once told me, no self-respecting botanical artist leaves home without her secateurs!

Right, onto the next challenge!
“The best way out is always through.”
Robert Frost
previous next 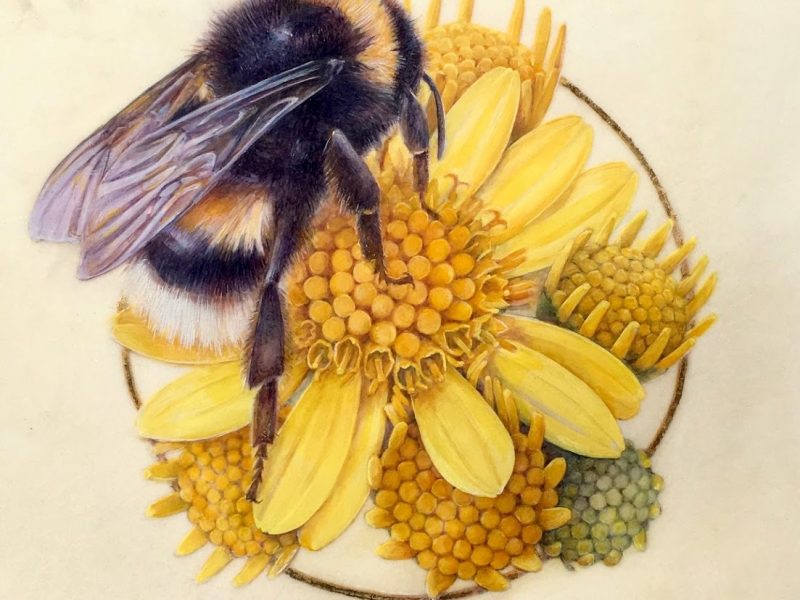 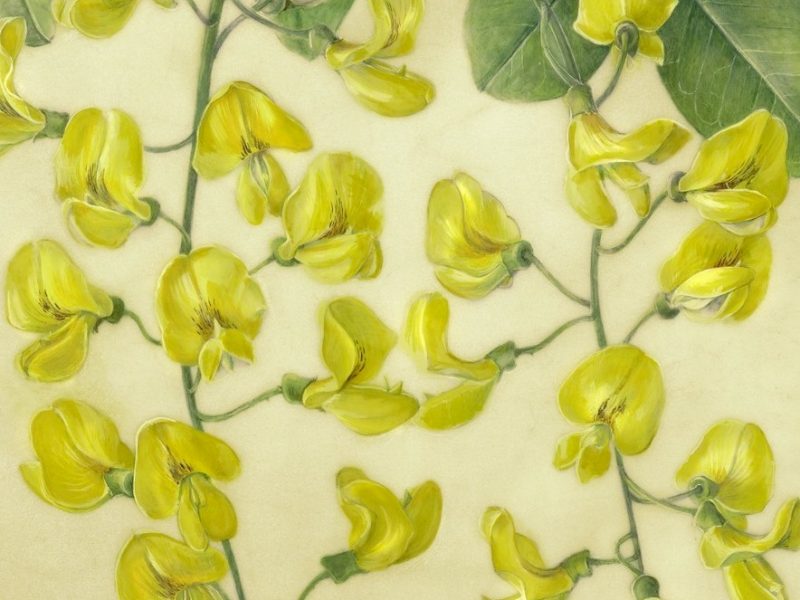