Byclare McSharry
beginning of botanical art, Botanical Chamber Karnak, Egypt, Hatshepsut, Lotus, Nebamun, Papyrus, Robert Thornton's Temple of Flora, ThutmosisIII
0
There’s an old Egyptian saying, “Once you drink from the Nile, you are destined to return”.
However I knew from the moment I stepped out into Cairo’s warm night air, heavy with the sweet scent of jasmine, twenty five years ago, that Egypt would always be a part of my life.
Whilst living in Egypt, there was nothing that I loved more than to go off and explore the Egyptian countryside, always bringing my sketchbook and my camera . Once you escape the hustle and bustle of Cairo, it’s so easy to imagine that you have stepped back in time- cattle grazing in marshy pastures along the Nile, long-robed men working in the fields, children scampering down to the river’s edge to play and splash in the cool waters, tall palm trees standing silhouetted against a balmy sky.  It was scenes like this that inspired me to learn how to paint in watercolour. 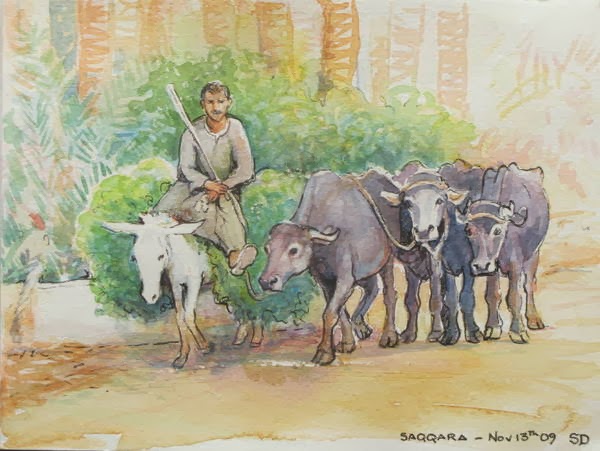 Wherever I went, I was made feel most welcome, and would often look up from my sketchbook to find myself completely surrounded by curious children, or strangers bringing me hot mint tea or a cushion from their home to sit on as I sketched.
It was in Egypt too that I first started to learn about botanical art, inspired by all the beautiful flora and fauna that I saw.  How appropriate it was to discover that Egypt was also the birthplace of botanical art!
A lot of what we know about ancient Egypt comes from the art painted on the walls of temples, tombs and papyri. To the ancient Egyptians, art was not just a decorative feature, it also contained powerful magic.  The images that they created  reflected their love of order and the triumph of man over nature. Accurate representations were important because all of the people, plants and animals portrayed would continue to live on in the afterlife. They used clean lines, simplified forms, areas of flat colour, and a balanced composition to create their images. They were not interested in light and shadow as these were transitory features. Every image and colour had a symbolic meaning and purpose. Pigments were mainly mineral and mixed with mediums such as gum Arabic (resin from the acacia tree), wax and casein.
“Nature is the best and the shortest route towards knowledge”
Inscribed on the wall of a temple in Luxor
The ancient Egyptians studied the flora and fauna carefully, believing them to hold all the secrets of life. Their culture was very closely bound to the natural world. The blue lotus, Nymphaea caerulea, was considered the most sacred of all plants. The flowers emerge from the water each morning at dawn, just as the sun is being rolled into the sky by Kheper, the sacred scarab beetle, and so the flowers were considered living proof of rebirth. Their intense fragrance was an indicator of a divine presence. The white lotus, Nymphaea lotus, was also sacred, as was the papyrus plant, Cyperus papyrus, which grew in dense thickets along the banks of the Nile, harbouring an abundance of wildlife. It symbolised fertility and also protection, and was one of the most useful and important plants for the ancient Egyptians.
The ancient Egyptians loved their gardens, which they filled with a large variety of trees, vegetables and flowers. Usually at the centre of each garden there was a pool of water filled with lotus and papyrus plants. As well as places of sanctuary and cool shade, gardens had religious importance and many  deities were associated with the plants grown within.
The most famous of all gardens was probably that of Hatshepsut(1508–1458 BC), one of Egypt’s first female pharaohs and certainly one of the most successful, ruling for over twenty years. One of her great achievements was her trade expedition to the fabled land of Punt (thought to be Somalia), where they collected trees of myrrh and frankincense, the resin of which was vital in the ritual of embalming. The trees were transported back in baskets with their roots intact, and planted around her magnificent mortuary temple, Deir al Bahri, their transportation forever recorded on the walls of her temple.
However it was her young nephew and co-regent Thutmosis III, who was the creator of the first botanical art. Whilst his aunt remained in Egypt, he travelled extensively, expanding their empire until it stretched from Sudan to Syria. When he returned, he decided to build a great Festival temple at Karnak, something that would reflect his greatness as God-King. He filled his Festival Temple with gold and precious stones, and at it’s heart built a secret sanctuary, known as The Botanical Chamber which was decorated with wonderful painted carvings of more than 300 specimens of flora and fauna. An inscription reads that the chambers contained
“…all the plants that grow, all the flowers that are in God’s hand …“
Although the temple lies in ruins now, it is still possible to identify many of plants and animals depicted- Dracunculus vulgaris (Dragon Arum),  Kalanchoe aegyptiaca, chrysanthemum, Arum italicum,  Dipsacus (teasel) , Iris flowers , Punica granatum (pomegranates), Vitis vinifera (grapevines), a female gazelle, a goose, a lapwing, a plover, a white egret, a migrating grasshopper and many more.
Fortunately, the Botanical Chamber has been very cleverly reconstructed in a video and we can get an idea of how this great work of art must have looked three and a half thousand years ago. It is in arabic but subtitled, well worth viewing!
Egypt has a special place in my heart, and as they say, I have drunk the waters so I will return.
“Egypt is a great place for contrasts: splendid things gleam in the dust.”
Gustav Flaubert, Flaubert in Egypt: A Sensibility on Tour