Escaping to the Studio

Byclare McSharry
Calamondin orange, Citrofortunella microcarpa, escape, Hesperides, hesperidium, oranges
0
“Art is the only way to run away without leaving home.” Twyla Tharp
I’ve always loved this quote because art truly does provide the means to escape. This week I have been busy in my studio painting oranges. My little heater and daylight lamps give me all the warmth and brightness I need, and an excellent audiobook The Luminaries, has captured my imagination and transported me back in time to the 19th century whilst I paint.
The little oranges have helped too- such a sweet little fruit. I find them so evocative of the warm Mediterranean climate. Apparently there are over 35 million orange trees in Spain alone!
However my little calamondin oranges (Citrofortunella microcarpa) , like most citrus fruit, orginated in Asia where they were first cultivated in 4000 BC. By 200 BC, the Romans, impressed with the nutritious fruits and fragrant evergreen trees were growing them in their gardens. The health benefits of the fruit were so well known that Portuguese, Spanish, Dutch and Arab sailors planted citrus trees along the trade routes to help prevent scurvy. Christopher Columbus is said to have brought citrus seeds with him on his second voyage to the Americas in 1493, and considering that Brazil is now the world’s foremost producer of citrus fruit, it’s fair to say that they thrived in their new habitat.
Even in mythology, oranges have played a role.
Hera, the Greek goddess of Women and Marriage, and wife of Zeus, had a beautiful garden near Benghazi in Libya, in which grew a tree whose fruit had the power to bestow immortality. They are often referred to as golden apples, but later believed to be oranges. Three nymphs called the Hesperides were tasked with guarding the tree, along with a multi-headed serpent named Ladon. However one day the goddess of Discord, Eris, slipped into the garden and stole a golden fruit. She inscribed the golden fruit with the words “To the most beautiful”, and threw it into a wedding party from which she was excluded, and in the ensuing chaos, the Trojan Wars were started. You can read that story here 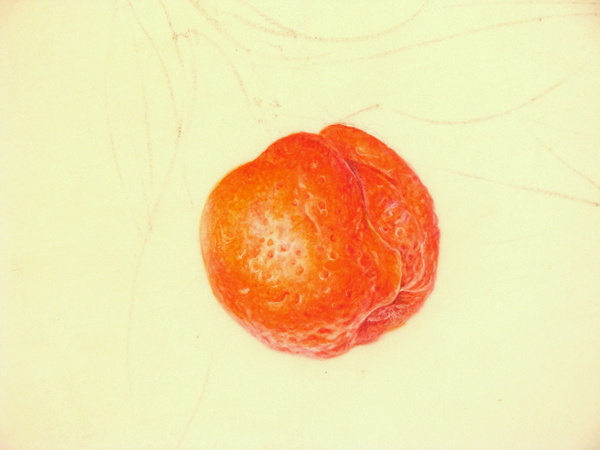 Linnaeus obviously believed that the “golden apples” were oranges too, as he originally gave the name Hesperideæ to the order containing citrus fruits.  All citrus fruit are are still known as hesperidium– a type of modified berry with a tough leathery rind which contains volatile oil glands. The juicy interior is divided into segments called carpels, each containing fluid-filled vesicles that are in fact, specialized hair cells. I bet you never realised that you were eating hair!
Aside from the numerous health benefits, oranges are also fun to paint. As you can see, I decided to paint the three oranges first and then paint the leaves, which are still causing me problems. 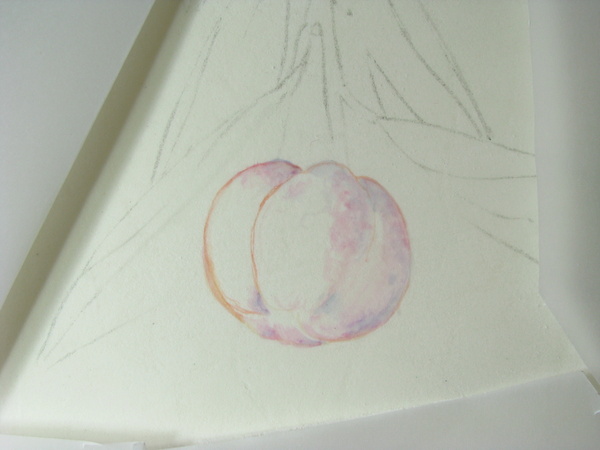 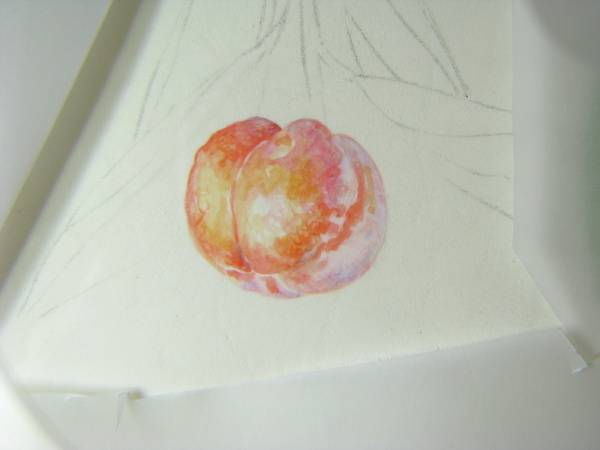 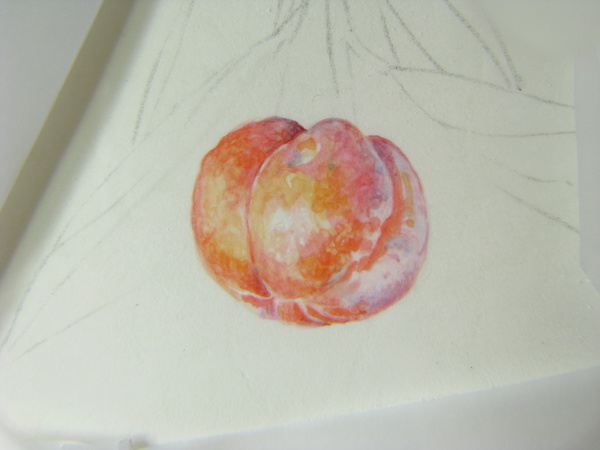 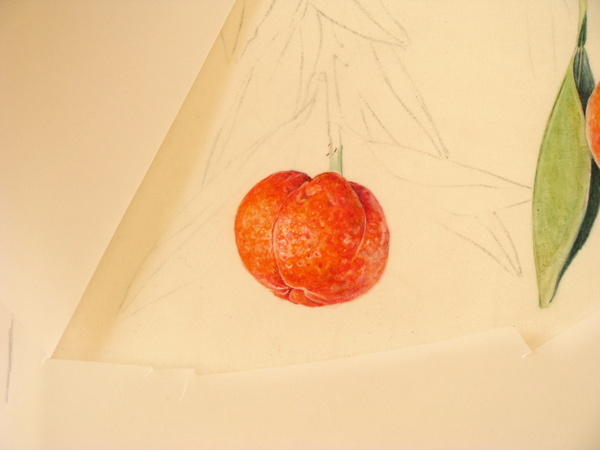 The trick seems to be to take time to build up the colours. Using the reflective silver paper helped bounce light back onto the fruit. I started with cobalt violet, permanent rose and a touch of cerulean (Schmincke) in the cooler areas, before tackling the warmer areas with new gamboge, winsor orange, winsor orange red, scarlet lake, quin red and purple lake. I kept the colours quite clean, but towards the end added a tiny bit of the green into the mix to create the darket shadows. I built up the layers in small circular strokes to help create the dimples. At the end, I really looked closely at the dimples to get the tiny highlights and shadows. I think it’s this final touch that makes all the difference.

The leaves continue to drive me demented. I spent a whole day painting leaves, and then made the mistake of fiddling. Vellum does not like to be fiddled with, and bits of paint began to lift, until the whole leaf became a horrible patchy mess. I fixed it as much as I could and decided to leave them  unfinished and move on instead to the third orange. Dianne suggested using another piece of paper to wipe the excess paint off before I put brush to vellum, and this seemed to help. I keep forgetting that vellum does not like wet paint at all! 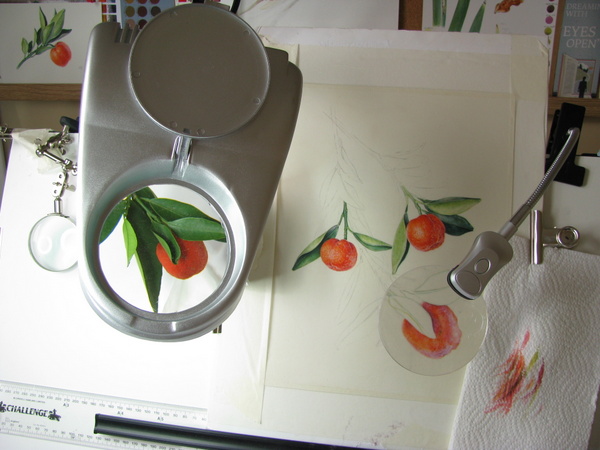 So next week I will be tackling those leaves once more, and “escaping” the bad weather. I’ll leave you with the wise words of Henry David Thoreau
“Maintain a kind of summer in the midst of winter, and by means of windows even admit the light, and with a lamp lengthen out the day.”
previous next