Byclare McSharry
Daniel Smith paints. colour chart, Egypt, feather painting, Feathers, Hoopoe bird, Natural sketchbook exchange, step by step, Upupa epops
0
This week has been a challenging one, but when times get tough, the best place to escape is into the quiet sanctuary of my little studio.  I was looking for something suitable to paint when, whilst flicking through an old sketchbook from Egypt, a bag of feathers fell out. They were hoopoe feathers.
I remember how astonished I was the first time that I saw a Hoopoe bird, Upupa epops, with it’s dramatic crown of golden feathers tipped with black, and striking black and white plumage. They are quite unlike any other bird, and it’s easy to understand why people have always been fascinated with them. 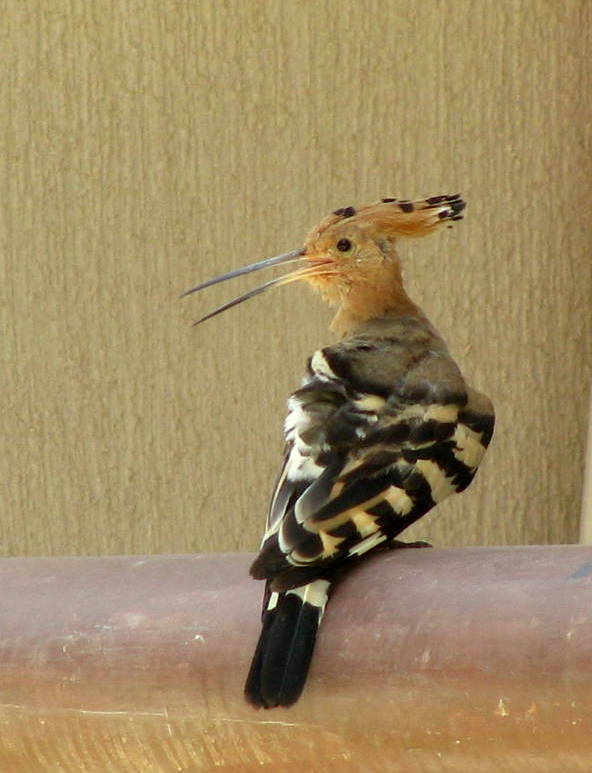 The Ancient Egyptians revered them, the Greeks and Persians wrote stories about them. They are mentioned in the Bible and also in the Koran, where there is a delightful tale about the Hoopoe, King Solomon and the Queen of Sheba.
They fly in such a strange way too, like giant swooping butterflies, and make a very distinctive call which gives them their arabic name of hudhud.
However my tale of the hoopoe is a little sad. 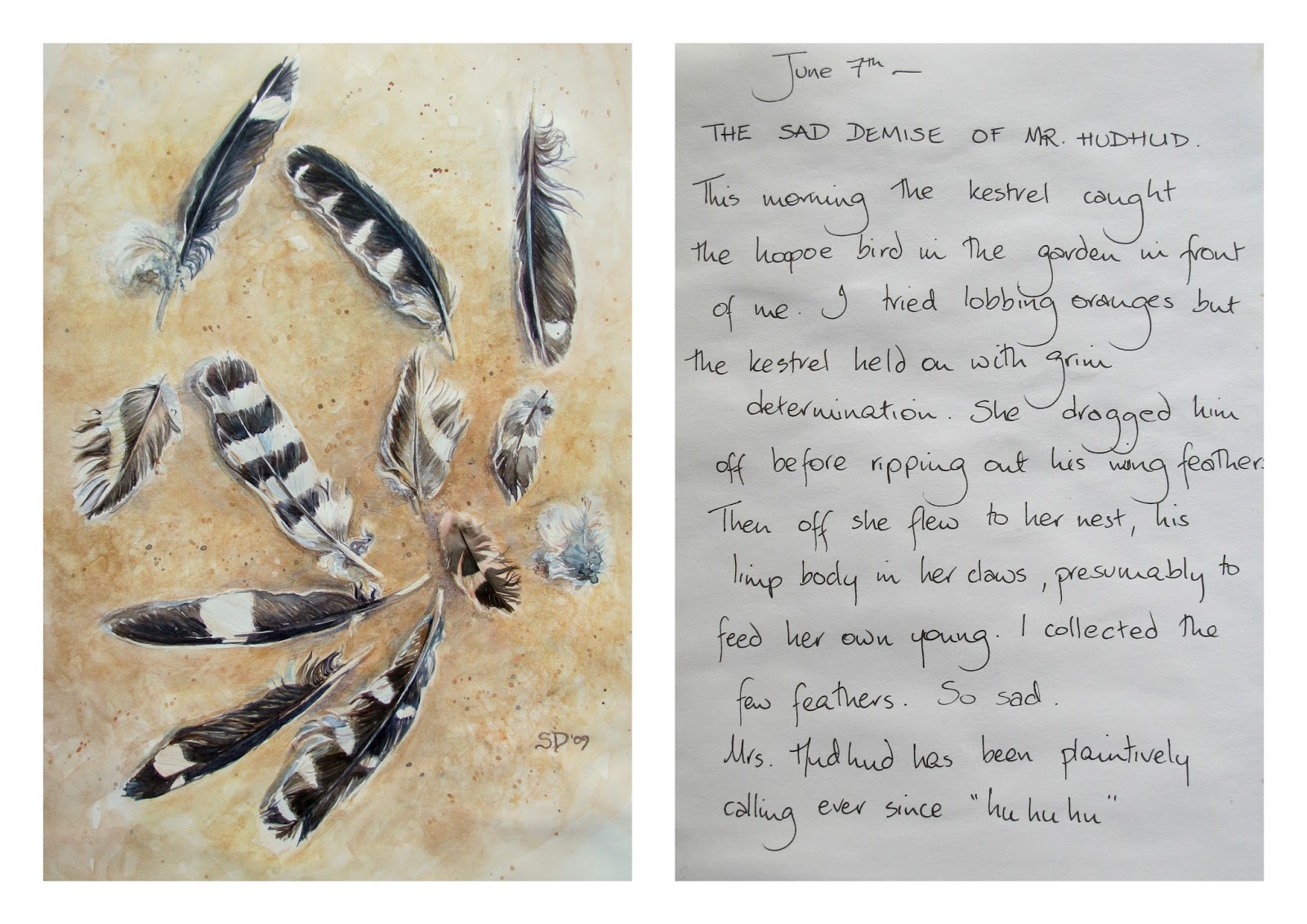 There were a pair of hoopoes that lived near my Cairo home (apparently hoopoes mate for life). I used to love watching them foraging on the grass together. Disaster struck one day when a kestrel swept down and killed one of them. I tried to intervene, but I was too far away, and all that was left was a small pile of wing feathers which I duly gathered up. 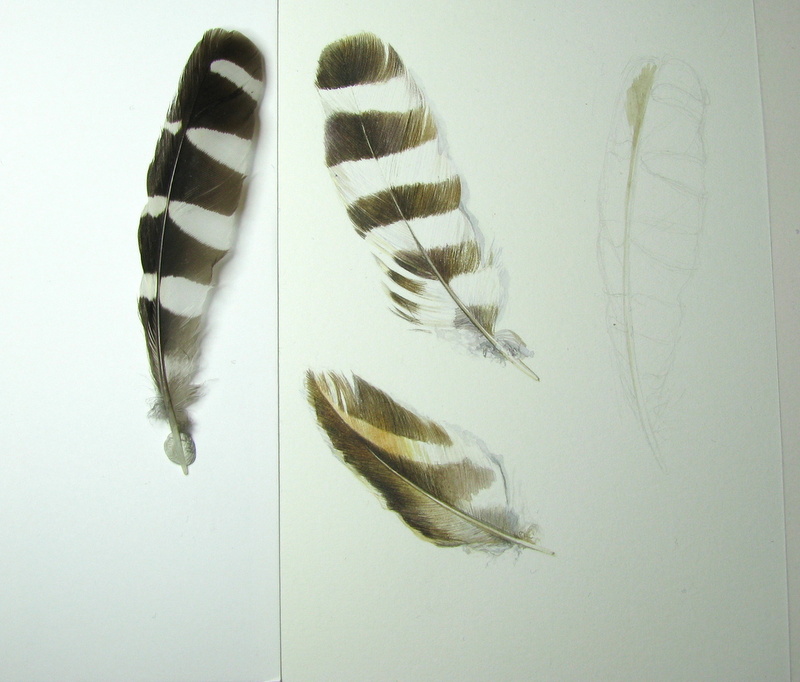 So feathers became my distraction for the week. 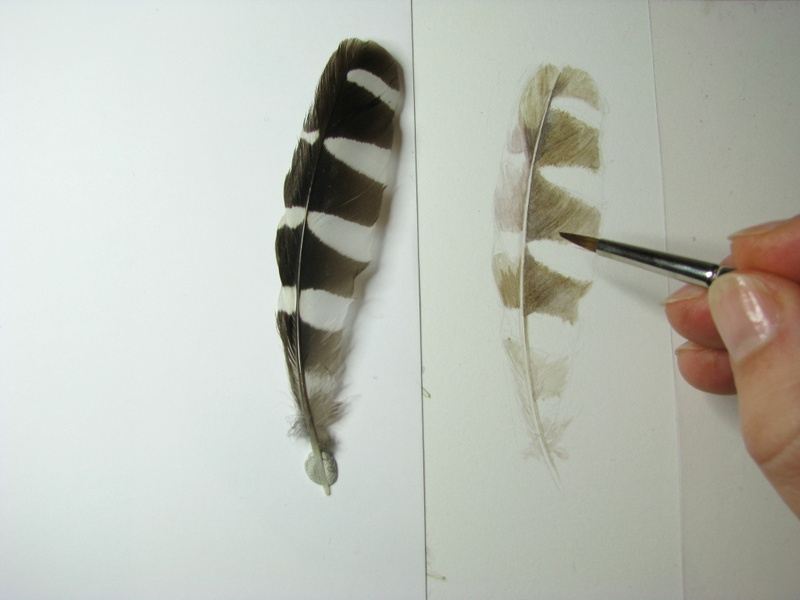 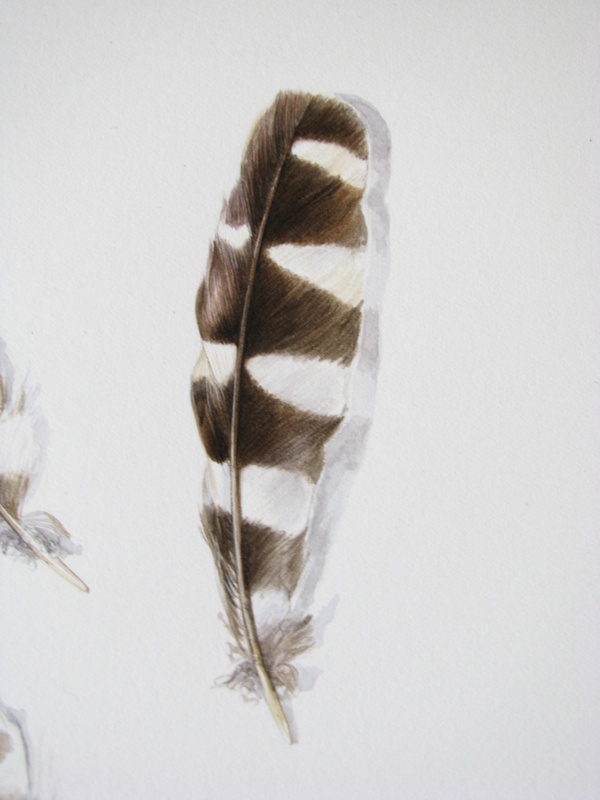 Having painted three little hoopoe feathers, I decided to paint another large feather that I had found in Egypt. I still have no idea what bird this came from, perhaps a grouse?  Feathers can be quite tricky to paint. Although they don’t wilt or move like plants do, they require a fair bit of patience and a lot of fine brushwork. Once I have mapped out the patterns of the feathers, I then go over with a fine brush building up the layers of colour. 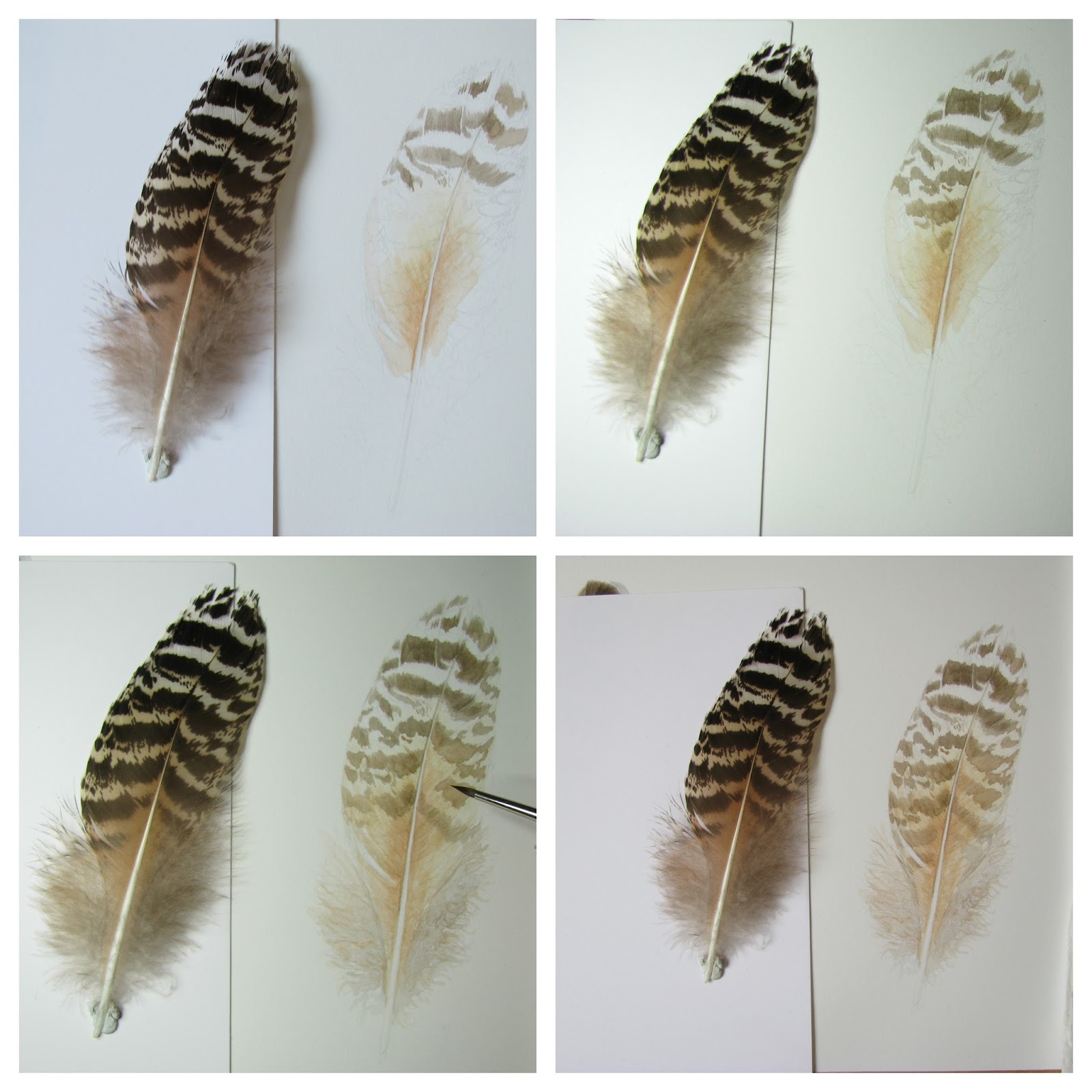 I have built up quite a collection of earth colours and although I do like to mix up my browns, sometimes it’s just easier to use them straight from the tube or pan. I find that the Daniel Smith paints have a particularly nice range of colours- I love their raw umber and buff titanium, both quite unlike any other colour and so useful. Winsor and Newton manganese brown, burnt sienna and sepia were also very useful with the feather palette.
A lovely curly goose feather from Frankfurt then took centre stage, lending a bit of movement to the composition. I don’t have a huge range of feathers, but I found a hairband in Tesco which I carefully pulled apart to give me a couple more. I’ve no idea what bird these came from, but they are very pretty. 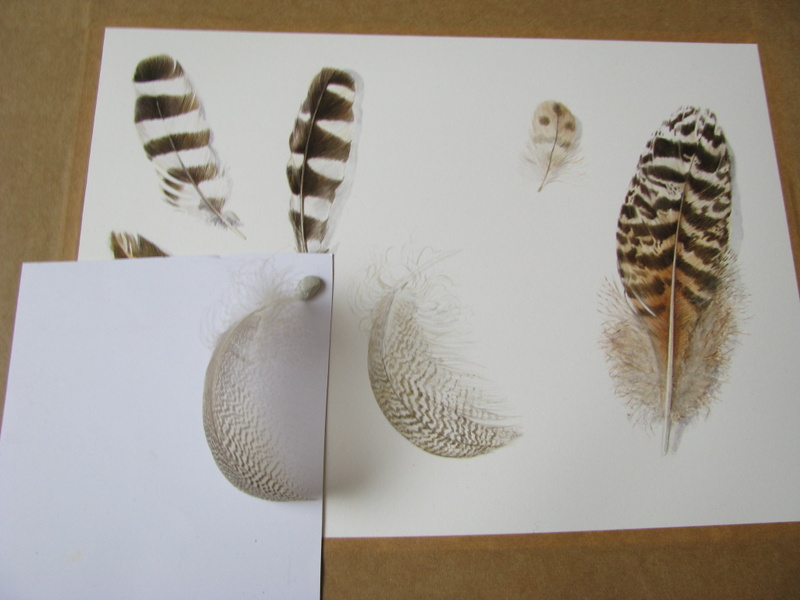 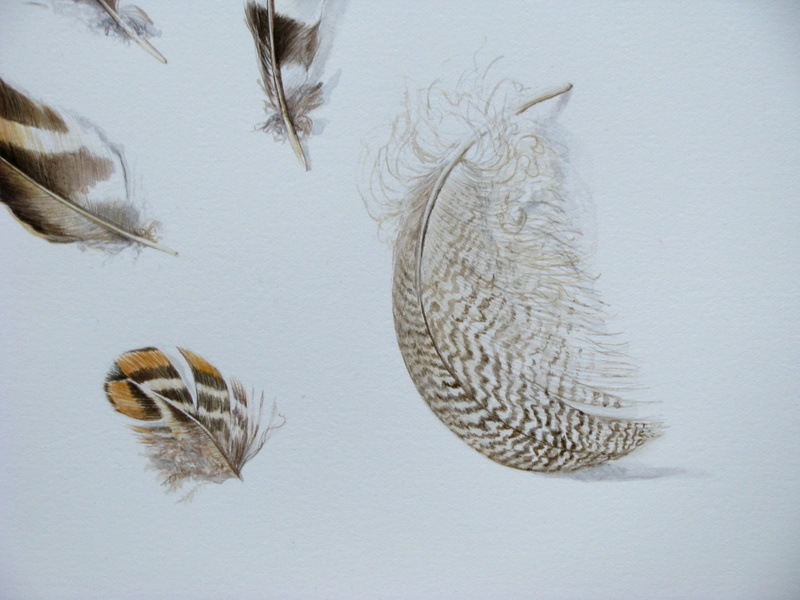 I really enjoyed painting these feathers. They are definitely a subject that I will be painting again, although I really need some new ones for my collection. In the meantime, this page of feathers will go into my friend Terri Dauncey’s sketchbook, for the Nature Sketchbook Exchange. 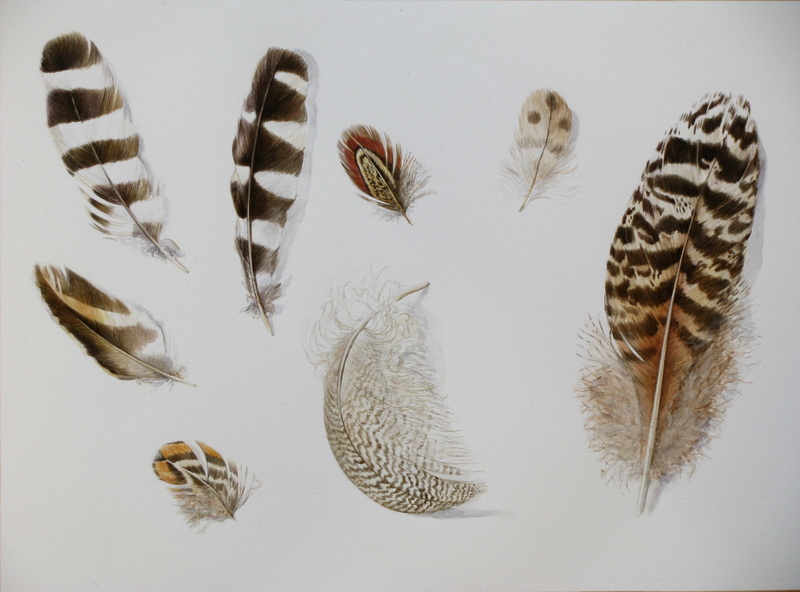 “It’s not enough to have the feathers. You must dare to fly!” ― Cass van Krah
previous next 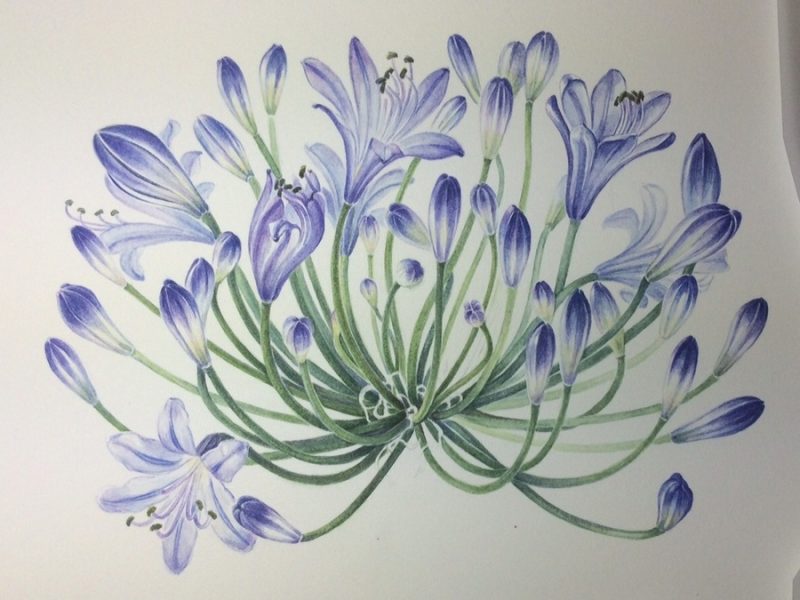 Beware of the Agapanthus 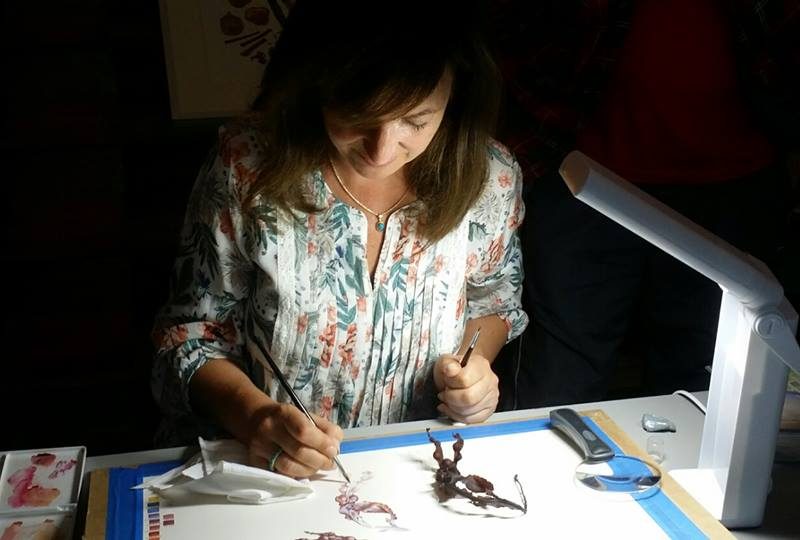 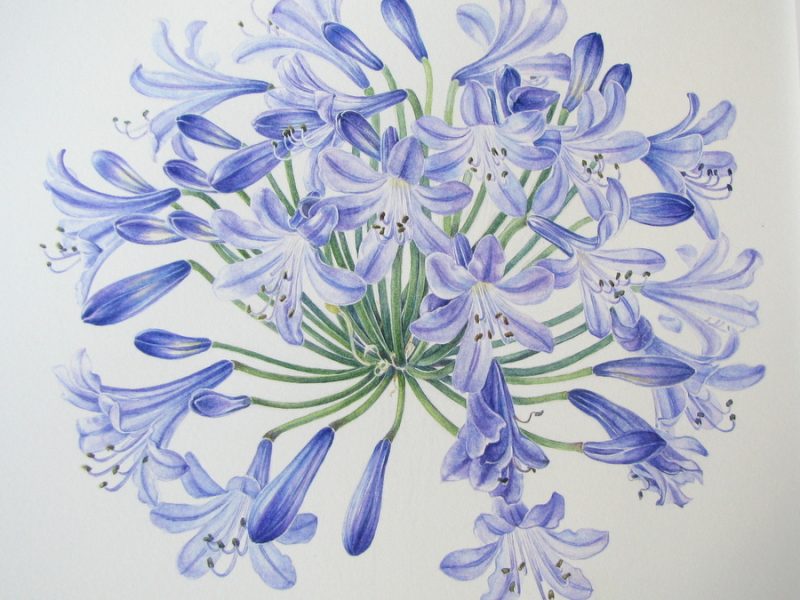