In praise of the Daisy 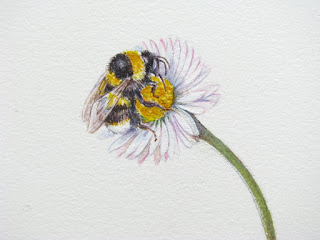 “The flower doesn’t dream of the bee. It blossoms and the bee comes.”
Mark Nepo
I have always loved daisies, Bellis perennis . There’s just something so bright, cheerful and positively defiant about them. So I jumped at the chance to do a small painting of daisies for a friend. To me, nothing sings of summer more than the sight of daisies on the lawn. It makes me want to kick off my shoes, sit on the grass and make daisy chains.
As A.A. Milne said,
“Weeds are flowers too, once you get to know them.”
The Latin name for daisy is Bellis perennis meaning “everlasting prettiness”.
The word “Daisy” is thought to come from it’s earlier Saxon name “Day’s Eye”, which is probably  because every evening at sunset the daisy closes it’s petals over it’s golden centre, and unfurls them at dawn the following day, as if opening it’s eye.
We still refer to someone who has had a good night’s sleep as appearing as “fresh as a daisy”.
In fact the little daisy has been given many names throughout history, my favourite being the old Welsh name of “Trembling Star”.
It has long been considered a medicinal plant and featured in many of the early herbals.
It was also called Woundwort or Bruisewort because of it’s healing qualities. The Romans were said to carry bags of fresh daisies into battle, so that the wounded could be treated with bandages that had been soaked with the juice of the flowers. The Crusaders too valued it’s healing powers for pain relief, bruising and broken bones. It is sometimes referred to as Poor Man’s Arnica, and used externally to heal bruises and trauma.
In fact the medicinal properties of the daisy are many. Henry VIII was said to have chewed on the leaves and flowers of daisies in order to relieve his stomach ulcers. Chewing the young leaves of daisies is also said to be a remedy for mouth ulcers. Both the leaves and flowers of the plant are edible and can be used in salads and soups. There are mixed reports as to the flavour, but the younger leaves are reported to have a less astringent taste. The flowers have a mild taste but are certainly a pretty addition to any dish.
One of the best ways to get the health benefits of daisies is to make a tea from the leaves. Daisy tea is said to aid digestion and strengthen the metabolism. It is also said to clear catarrh and soothe coughs. Simply pour boiling water over a handful of daisies and leave to infuse. Strain and serve.
I really enjoyed painting the daisies.  As they are an important bee food, I decided to include a White tailed Bumblebee, Bombus lucorum enjoying the daisy nectar. The flowers were fairly straightforward to paint, but the leaves were quite a different matter. They grow in clumps, a seemingly confusing tangle of hairy spoon shaped leaves. It took me a while to figure out just where to begin. I started by picking out the negative shapes in a grey wash of cerulean and cobalt violet with a touch of light red, before painting the leaves with a mix of indanthrene and transparent yellow. Rather than fuss over every leaf, I kept it fairly loose and painterly.
It was nice to have the opportunity to study this little plant closely. The little daisy is so easy to overlook, to dismiss it as a weed, but it has a lot going for it. If anything you have to admire it’s tenacity and it’s ability to pick itself back up after each run-in with the lawnmower.
Said the other little daisy, “I am very well content
To live simply in the meadow where the sun and rain are sent;
Where the bees all gather sweetness, and the dew falls on my head,
And the radiance of the moonlight is all around me shed.
The grass and clover blossoms admire my beauty all day long,
As I listen to the music of a bird’s delightful song”
~Gertrude TooleyBuckingham
“Two Little Daisies” (The other little daisy wished to be a rose)
previous next

The Sensitivity of Things – Mono no Aware 物の哀れ