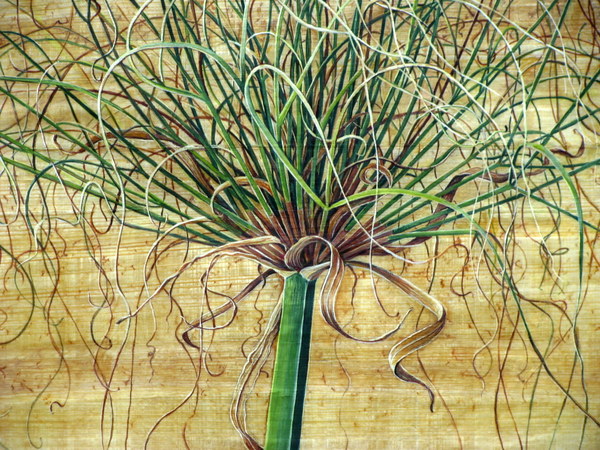 I am bursting with excitement this week!
I have just sent my papyrus painting off to the Gaiás Centre Museum in Galicia, Spain, where it will be taking part in an exhibition on Fresh Water, running from March until September 2014. It is an ambitious project which aims to cover all aspects of water, and man’s relationship with it.
This is translated from the exhibition description (yet to go out in English)-
“Paintings, sculptures, photography, video and installation go hand in hand of scientific devices, technological advances or ethnographic objects. A total of 700 works that immerse visitors in an intense aesthetic experience through great names of contemporary art such as David Hockney, Gerhard Richter, Mario Merz, Louise Bourgoise, Martín Chirino or Chema Madoz and teachers of classics from the likes of Piranesi, John Constable, Henry Lewis or Audubon”
That’s an impressive list of artists!!  I am so honoured that my painting will be in such good company!
My painting will help explain the story of the Cyperus papyrus plant, and how this humble aquatic plant transformed the lives of the ancient Egyptians and helped shape the world we live in today.
Over 5000 years ago the ancient Egyptians developed a way of turning this elegant sedge into a durable, lightweight sheet for writing on. With this discovery came the ability to communicate, share knowledge and ultimately write history. It was such an important plant that it became a symbol of ancient Egypt, along with the lotus flower. They didn’t just use it for writing though. They used the papyrus for boat building, basket weaving, food, medicine, perfume and fuel. The ancient Egyptians referred to it as “pa-per-aa”  which means “That which is of the Pharaoh”, and the manufacture of papyrus paper was kept a closely guarded secret.
However in 105 AD, a Chinese court official Ts’ai Lun invented paper, and within a few centuries paper and vellum began to replace the papyrus paper. By the 10th century, papyrus cultivation had all but disappeared in Egypt, and with it went the secrets of the Pharaohs.
Over the centuries, people tried to make papyrus sheets but to no avail. It seemed that this art form was lost to the world. It wasn’t until 1962 when an Egyptian engineer, Dr Hassan Ragab managed to figure out the methods used. He travelled to Sudan and Ethiopia to bring papyrus plants back to Egypt, and planted a papyrus plantation on an island on the Nile. He also reintroduced plants that had once thrived in ancient Egypt.
To see how papyrus is made, watch this slideshow-  http://www.lib.umich.edu/papyrus_making/lg_intro.html
By the time that I travelled down the Nile, papyrus paper was once more readily available. I was fascinated to see the process and couldn’t resist buying a few blank sheets. 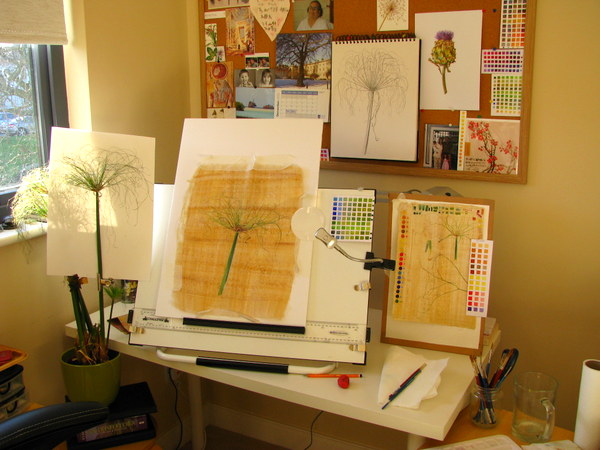 When I returned to Dublin, I was surprised to find a dwarf papyrus plant, Cyperus prolifer Lam in a local nursery. It was serendipity, I thought, for what subject could be better suited for papyrus paper? I experimented on the papyrus and eventually decided to paint in gouache, a first for me! Luckily my friend Claire Ward was on hand to give me advice about this medium. She has great gouache demos on her website http://drawntopaintnature.blogspot.ie/2011/09/gouache-technique.html 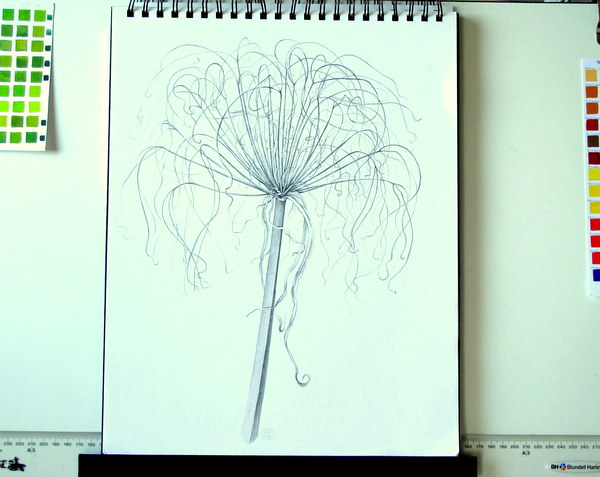 I did a graphite sketch of the plant and liked how the feathery stems of the umbel were almost calligraphic in nature. Painting a papyrus plant on papyrus paper was quite exciting because the paper has a lot of texture, and I tried to incorporate some of the fibres into the painting. It really is a beautiful plant, feathery and elegant.
Next month I will travel to Santiago de Compostela to visit the exhibition. I’ll be the one grinning like a Cheshire cat no doubt!