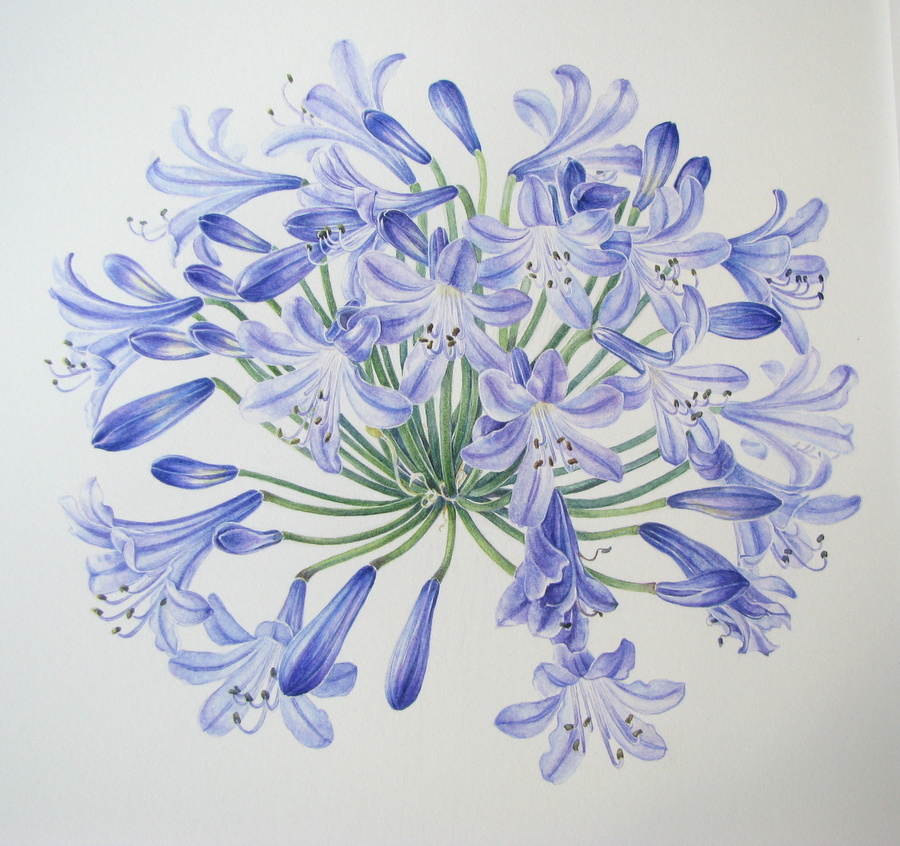 Byclare McSharry
Agapanthus africanus, blue flowers, Botanical Art, colour chart, flower painting, painting complex flowers, step by step, technique
0
I am not a flower painter.
Don’t get me wrong, I adore flowers of every kind, and I really admire artists who can capture that transient beauty with what seems like effortless grace. I’m just far happier painting fruit, seeds and dried plants, where I can indulge myself in the luxury of time, knowing that they aren’t going to wilt before my eyes.
The Agapanthus africanus is really not for the faint hearted. It’s a big robust ball of blueness that stands out taller than it’s neater cousins, Agapanthus praecox. Whilst doing my bud studies, I noticed with a bit of alarm, that there were over 50 flowers in each umbel! (I counted them in a fit of procrastination) Okay, so they weren’t all going to open at the same time, but once they started to open, it was definitely going to be a race against time. 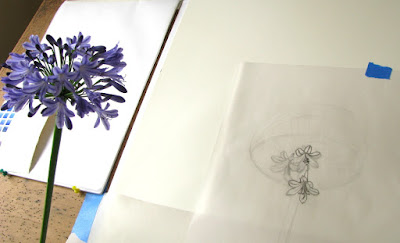 So how to start?
There are lots artists who very successfully draw out the complete flower and work on it as a whole. This approach can be great as it gives greater control over the tones. However that method doesn’t really work from me. I spent my first day carefully drawing out all the flowers, only to discover that they had changed shape overnight. Buds had popped open and flowers that were open had folded over. My big blue monster was not going to be easy.
The key to success is determination. If one technique doesn’t work, try another. There really isn’t a right way or wrong way, but it’s a case of finding a method that suits your style.
For me, that meant concentrating in smaller, more manageable sections. 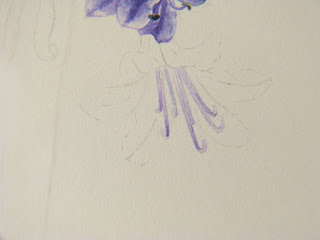 The flowers themselves are a simple funnel shape with six petals, six long elegant stamens and a shorter stigma. I found it easier to paint the stamens first with a tiny brush, a steady hand and a magnifier. 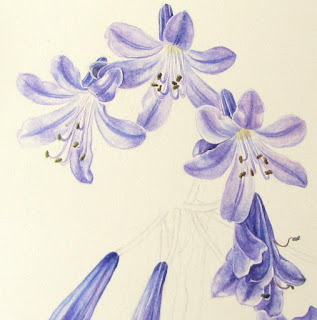 Concentrating on just the flowers meant that my palette was quite simple too. I used Daniel Smith Verditer for the first wash and dropped in some ultramarine violet whilst wet, particularly on the central stripes which have a soft edge. I carefully painted around the stamens.  I used the same colours to build up the form, adding cobalt and indanthrene towards the base of the flowers. In the places where it was very dark, I added a tiny bit of indigo to the mix. I know that indigo is a bit controversial because it can so easily muddy up the colours, but used sparingly, it’s a handy pigment. The anthers which are dark green (indigo and transparent yellow) were painted last. 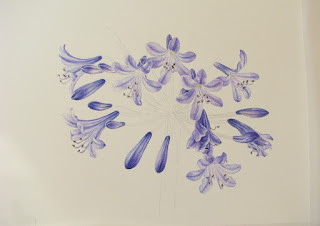 I kept an eye on the overall shape as I added sections. As I worked, I fell into a rhythm, starting with the foremost flowers and working backwards. I noted which buds were about to open and made a mental note to work on those the next day. I literally chased the flowers across the umbel. As flowers finished, I would remove them so that I could see the ones behind more easily. I loved the dying ones which twisted into great shapes, but had to resist the urge to add too many of them because I wanted to capture the freshness. 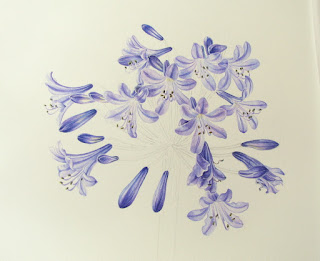 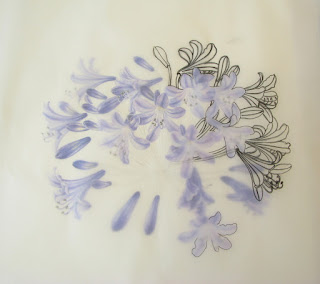 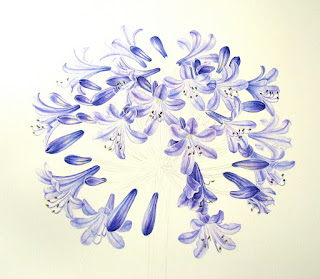 Once I felt that I enough flowers to convey the fullness of the umbel, I stopped. Now it was time for the greens. The pedicels lasted quite well which is more than I can say for the poor agapanthus! 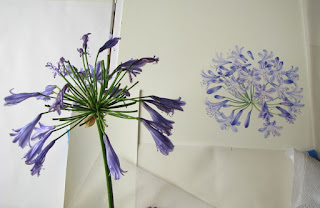 I did a quick colour chart (any excuse!) and then started to add the pedicels. I kept the same blues adding winsor lemon and transparent yellow to the mix.  I have still got a lot to do before this is finished, but I’m learning and I’m enjoying the process. 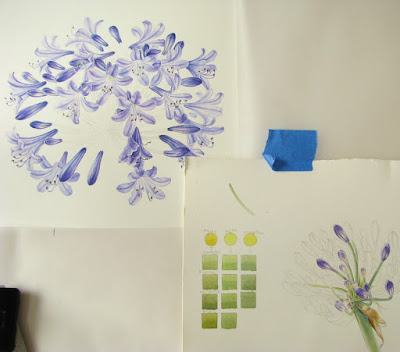 “Technique is only a vehicle.”
Callum Innes
previous next 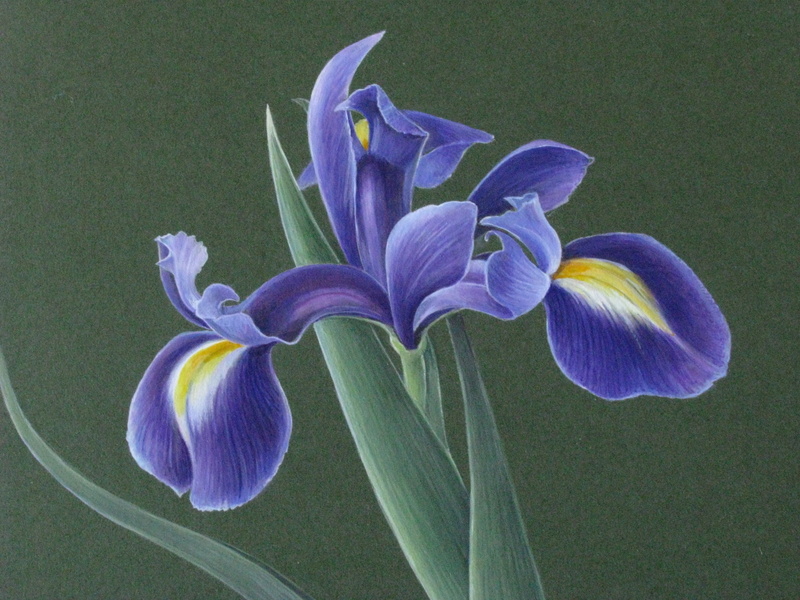 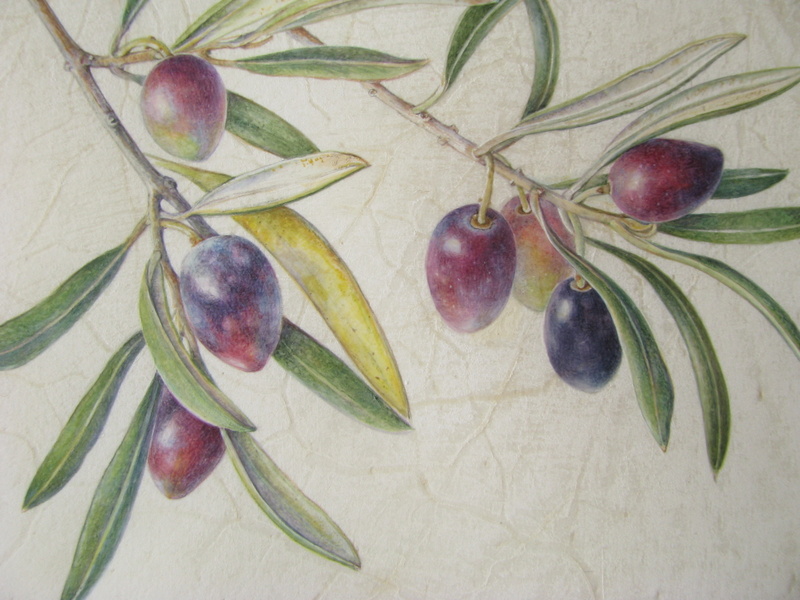