Byclare McSharry
Ancient Egypt, Carob, Ceratonia siliqua, Citrullus colocynthis, Doum palm, Hibiscus sabdariffa, Hyphaene thebaica, Medicinal and Poisonous Plants, Senna alexandrina
1
I’m very excited about the SBA’s exhibition, “Medicinal and Poisonous Plants”, in Frankfurt this October. The theme is one that really appeals to me, and has given me the perfect excuse to paint and research some medicinal plants that I have been wanting to paint for ages.
Egypt has long been famous for it’s herbs and spices, and in every Souk (market), you can find a spice shop- a wonderful Aladdin’s cave of spices, medicinal herbs, aromatic incenses, fragrant essential oils, all stored in large colourful baskets. Buying your wares involves a fair amount of haggling and friendly banter, along with the obligatory cup or two of fresh mint tea. I left with a bag full of exotic treasures. 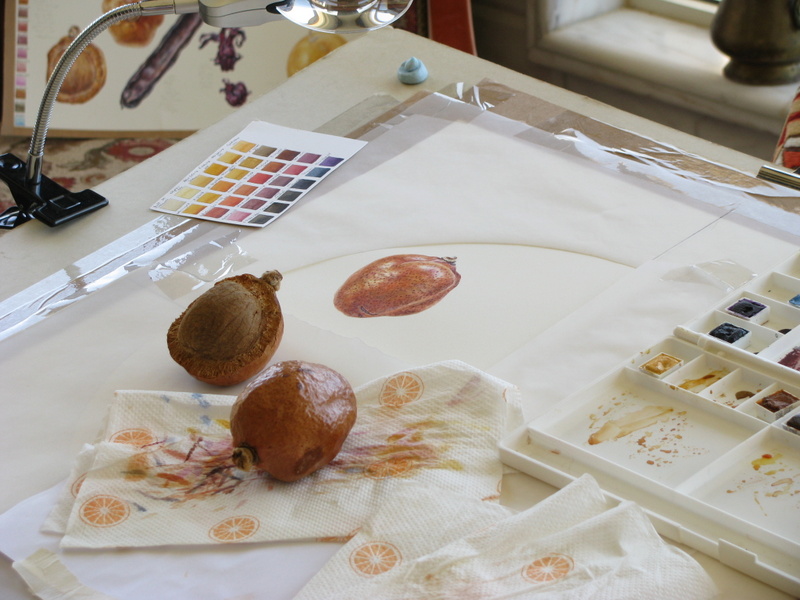 First onto the drawing board is the very peculiar fruit of the Doum palm, Hyphaene thebaica, also known as the gingerbread tree. The tree is not as common as it once was, in fact, I have only seen in growing in the south of Egypt, but in ancient Egypt, every Egyptian of standing would have had these trees growing in his garden.
The Doum Palm was considered a sacred tree, and symbolised of male strength and virility.   In fact, the fruit of this tree was of such importance that eight baskets full of dried doum fruit were discovered in Tutankhamum’s tomb, left to provide him with sustenance in the afterlife. 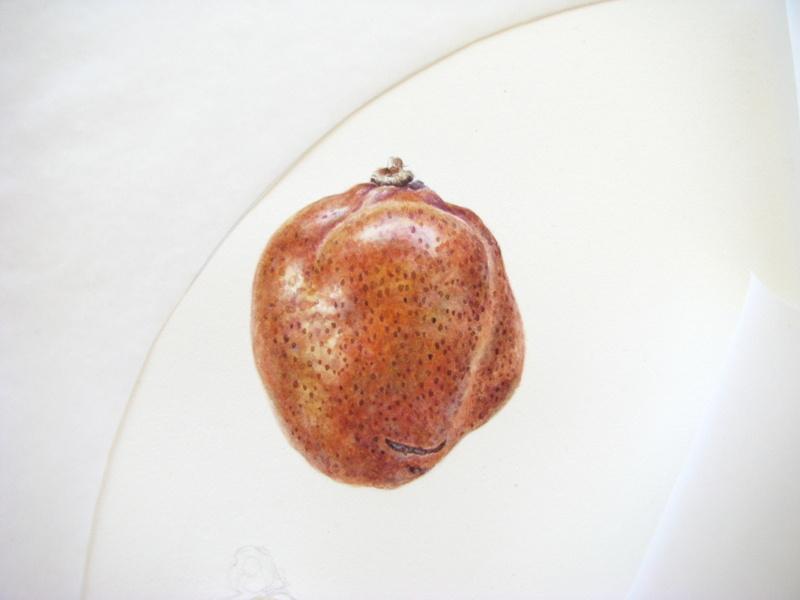 I am also painting the dried fruit. It’s rock hard with a shiny sienna-coloured appearance, and even though it’s dry, it smells delicious. Pliny describes it in his Natural History Book-
“… the wood of the cucus is held in very high esteem. It is similar in nature to the palm, as its leaves are similarly used for the purposes of texture: it differs from it, however, in spreading out its arms in large branches. The fruit, which is of a size large enough to fill the hand, is of a tawny colour, and recommends itself by its juice, which is a mixture of sweet and rough. The seed in the inside is large and of remarkable hardness, and turners use it for making curtain rings. The kernel is sweet, while fresh; but when dried it becomes hard to a most remarkable degree, so much so, that it can only be eaten after being soaked in water for several days. The wood is beautifully mottled with circling veins, for which reason it is particularly esteemed among the Persians.”
I never knew that the ancient Egyptians used curtain rings!
Despite being dry and hard, you can eat it. The only way that I can describe it is like biting into MDF to find it dissolving in your mouth and tasting a bit like the honeycomb centre of Maltesers. I haven’t tried soaking it. It’s usually made into a very sweet drink. The ancient Egyptians were correct to appreciate it’s health-giving properties- studies conducted by Egypt’s Mansoura University found that it significantly lowered high blood pressure and great reduced the risk of cardiovascular disease. In fact, it’s an all-round “super-fruit” packed with many nutritious and medicinal properties. 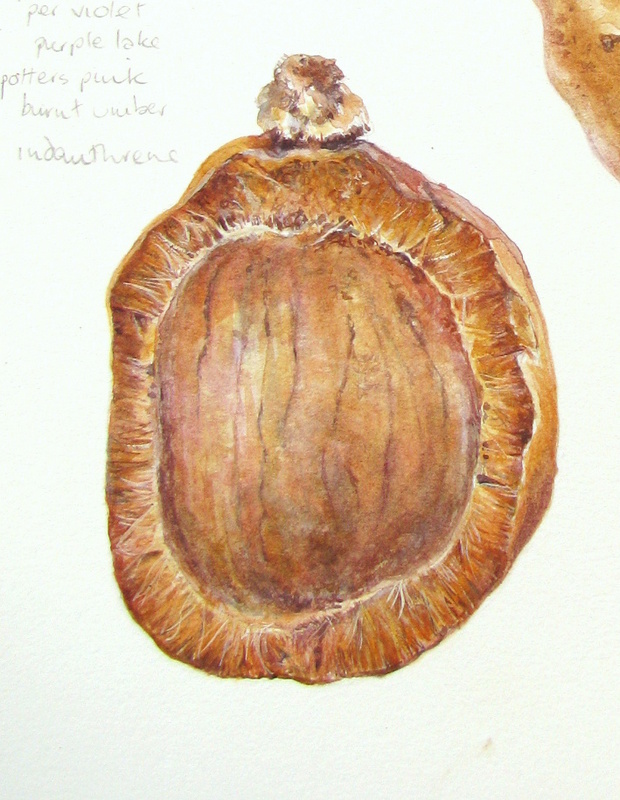 It is extremely hard and took me a long time to scrape the doum nut clean for the dissection. The “nut” is also rock hard, and has been described as “vegetable ivory”. Apparently there once was a factory set up over here to make buttons from it, in the days before plastic took over the world. 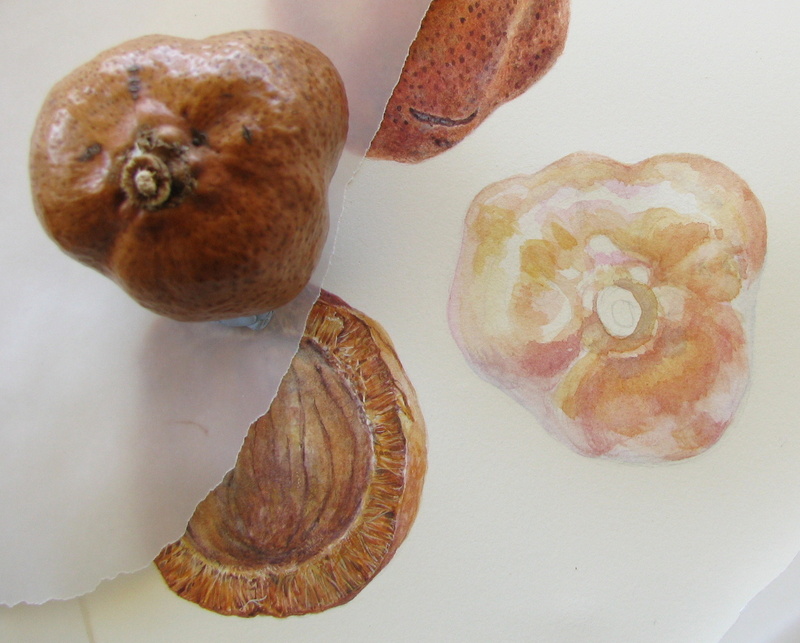 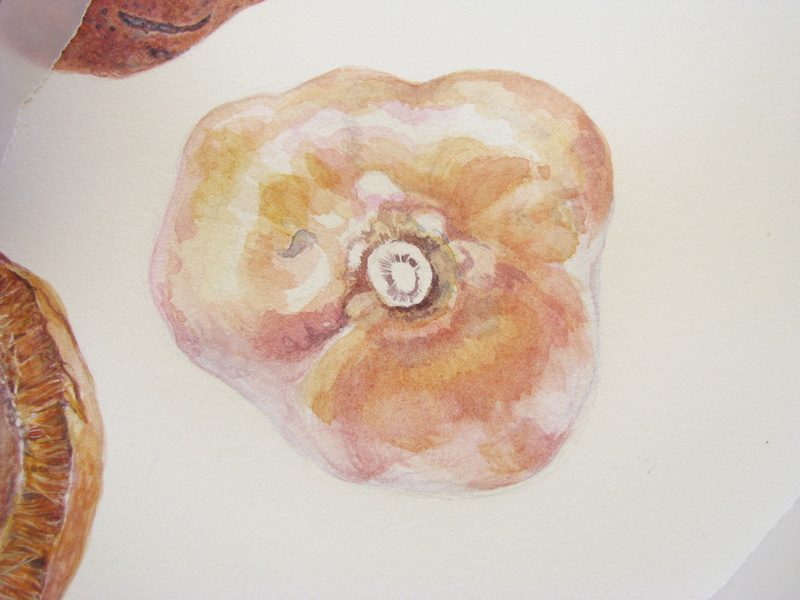 Painting here has proved a bit of a challenge, mainly because it’s so dry and hot. This year I brought a small bottle of ox gall with me, and although it doesn’t extend the drying time of the paint, it certainly helps improve the spreading of the washes. In between layers of paint, I’m having to pull a damp brush over the whole surface just to soften the edges of the paint. My new Rosemary flats are perfect for this. 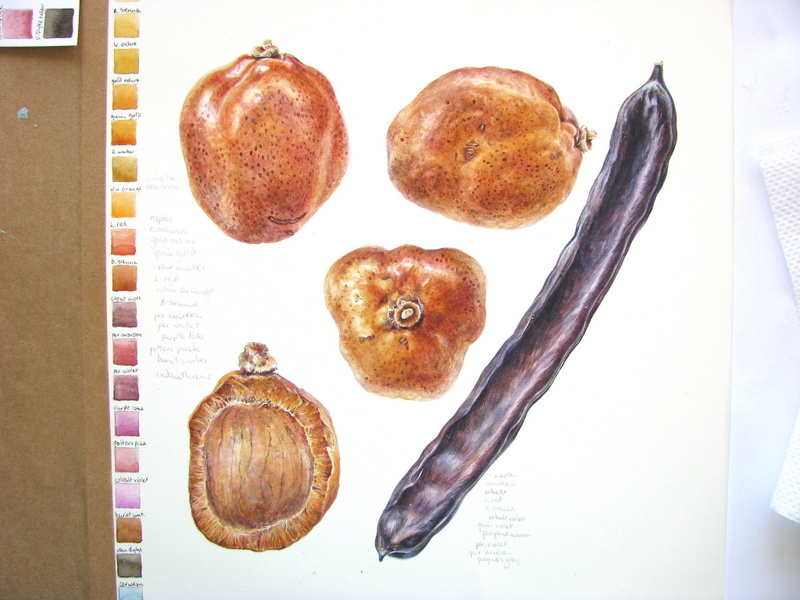 I painted a few practice doum fruit, and then tried out a Carob seed pod, Ceratonia siliqua. I’ve often seen these pods but was put off by the rather pungent smell. However having read about all the amazing health benefits, and the fact that it’s being used more and more as an alternative to chocolate, I decided to try some. It’s delicious. The pods are quite edible dry and nicely chewy, but it’s more usually made into a really refreshing drink. Again, it’s one of those “super-foods”, having analgesic, anti-allergic, antibacterial, antioxidant, antiviral and antiseptic properties. The seeds are interesting too. A resinous gum can be extracted from them which, in ancient Egyptian times was used to bind mummies. Nowadays this extract is used as a thickening agent, emulsifier and stabilizer in beverages, candy, desserts, ice cream, salad dressings, cheeses, jelly, baked goods and other products. The seeds were also used as a measurement of gold during Roman times … twenty four seeds being equal to the weight of one gold coin, which eventually gave us the phrase “24 carat”. 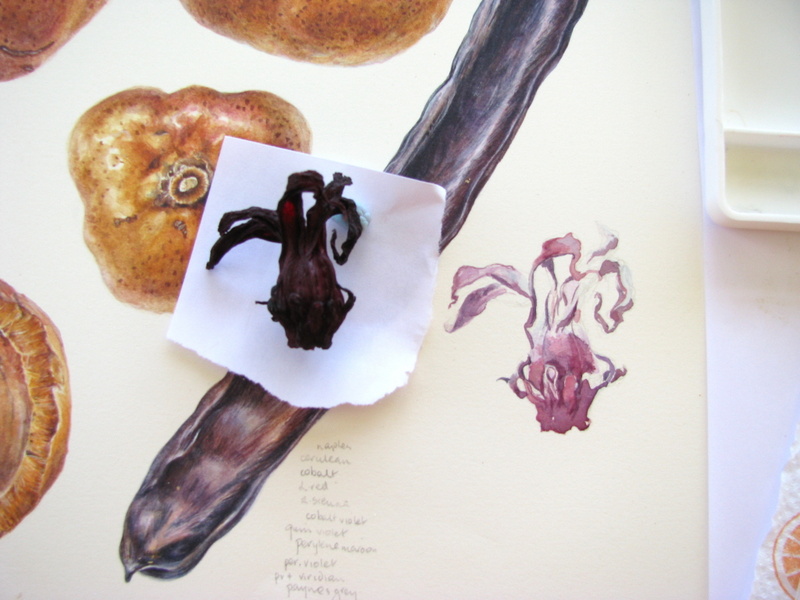 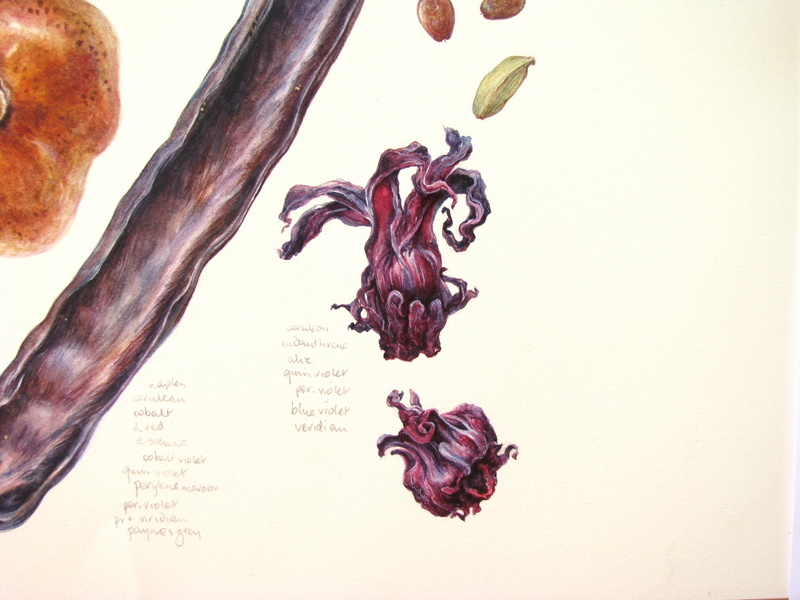 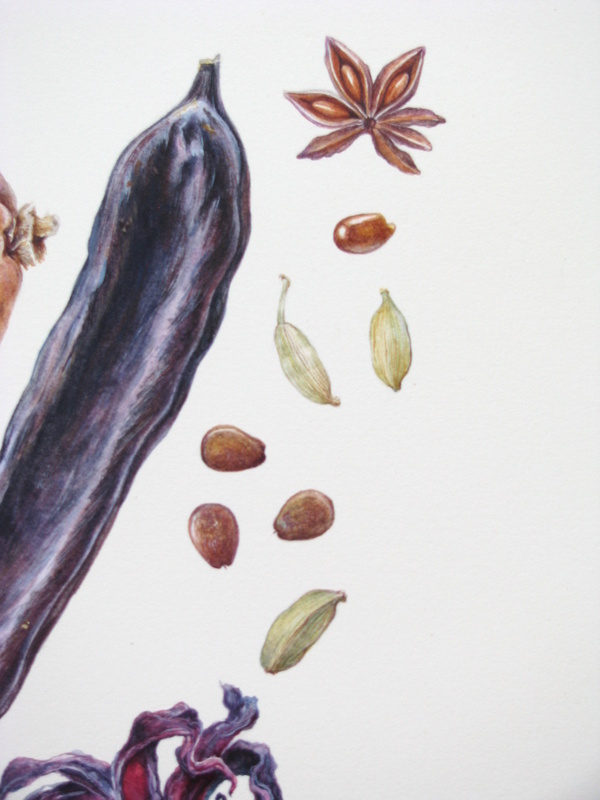 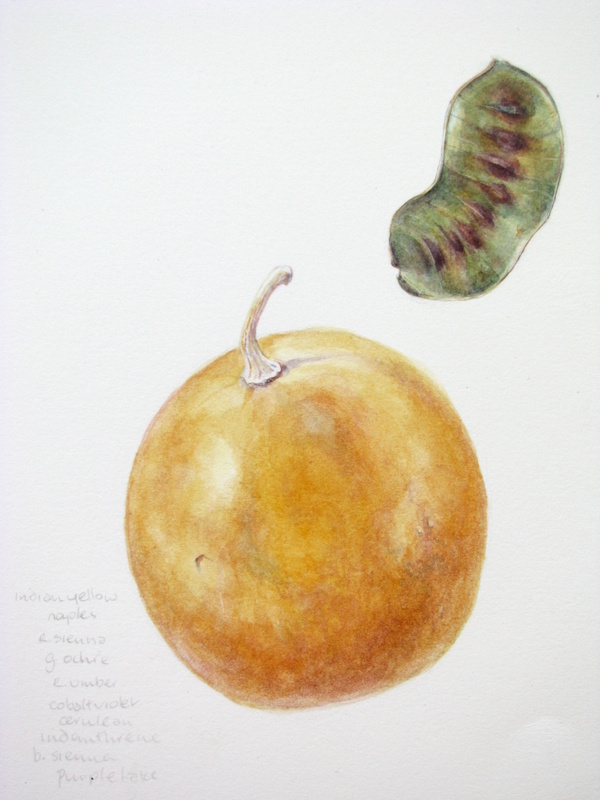 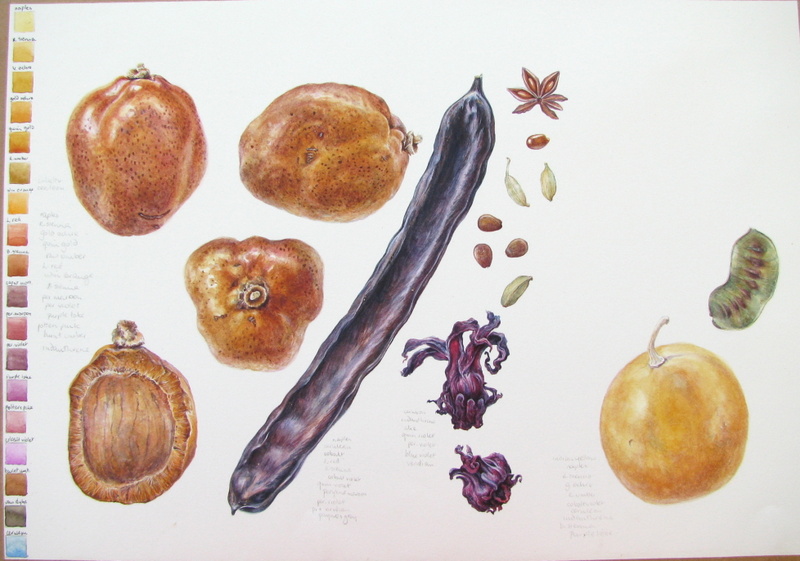 I’m going to enjoy painting this piece- the colours, the textures and the smells. My practice page is almost done, now it’s time to start on the real thing.
previous next

Laburnum and The Bee