The Sensitivity of Things – Mono no Aware 物の哀れ 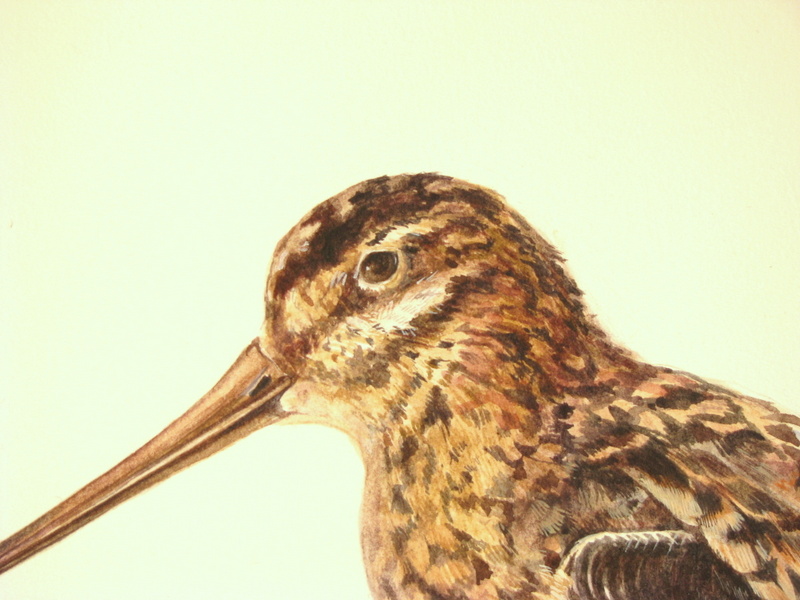 Painting can be a journey of the mind.
I have been contemplating the transience of life as I painted the little dead snipe this week.
I came across a beautiful Japanese phrase Mono no Aware  物の哀れ (moh-no no ah-wah-ray), which roughly translates  as “the sensitivity of things”.
It refers to an awareness of the fragility of existence, an appreciation for it’s beauty and the gentle sadness of it’s passing.
The term was coined in the 18th century by the Japanese literary scholar Motoori Norinaga to describe the essence of Japanese culture, but it remains popular as a concept in Japanese culture even today. An example of Mono no Aware would be the Japanese love of the cherry blossom. Every year crowds of people go out to sit beneath and admire the cascades of snowy blossoms, poignantly aware that these blooms will only last a week. Similarly a snowy landscape, the waning moon, the plaintive call of geese, even the ripples on the water of a lake can also evoke feeling of Mono no Aware.
Mono no aware is about the transience and bittersweet nature of life. 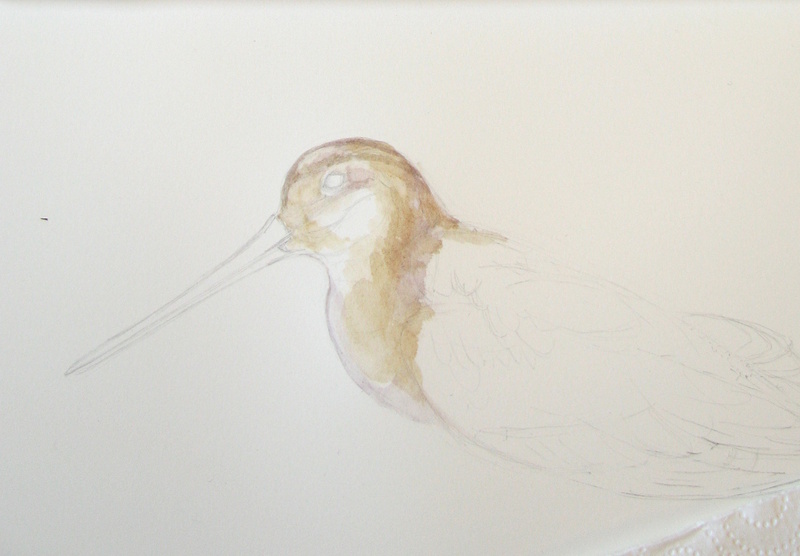 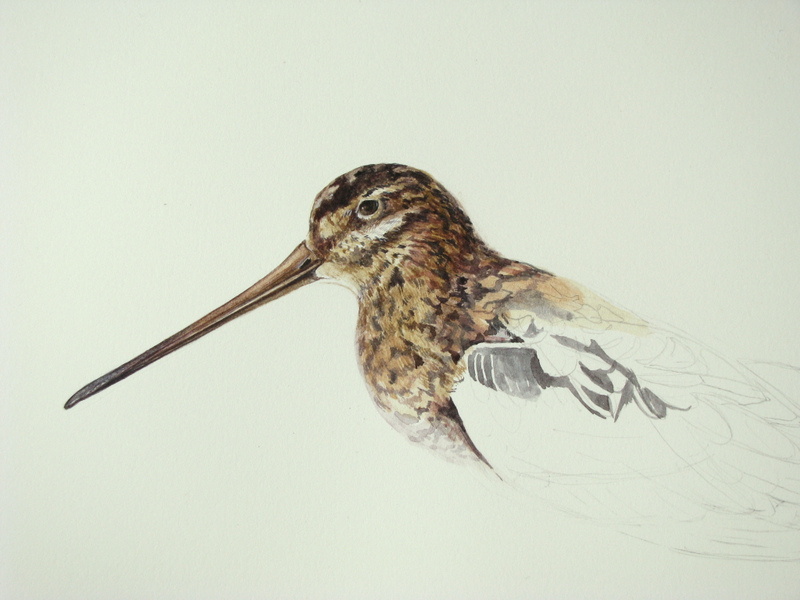 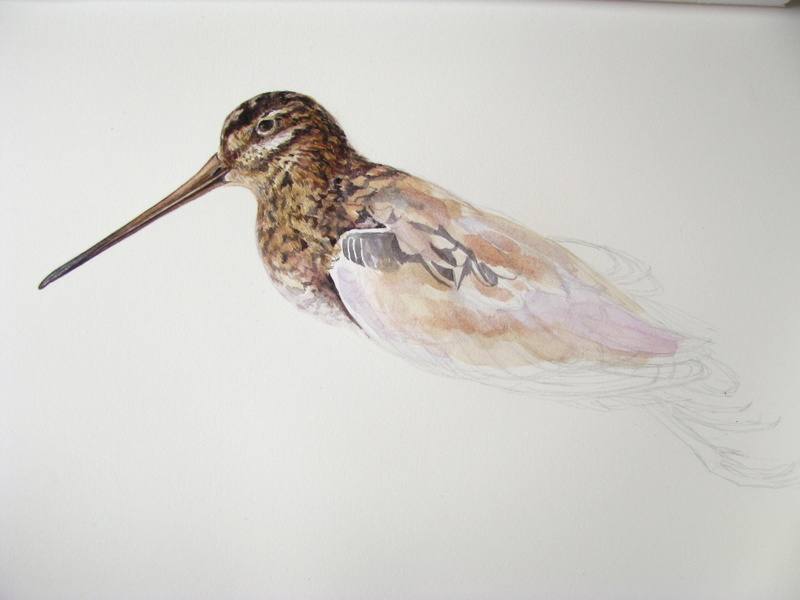 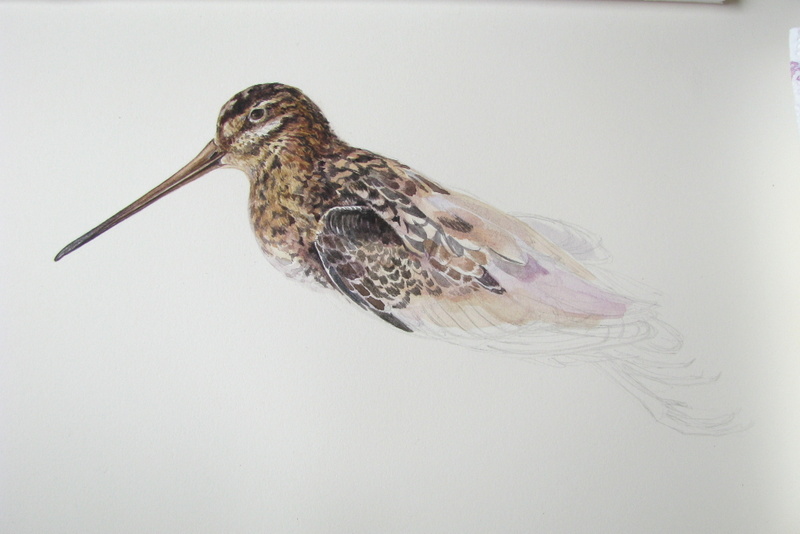 My snipe painting is also an example of Mono no Aware. I considered painting the snipe as if he were still alive, but decided that even death has it’s own quiet beauty, and so I chose honesty instead.
Far from being morbid subject, it felt like such a rare honour to be able to study the beautiful patterns, colours and structure so intimately. The only thing that I recreated was the eye, which had not survived the nightly freeze. 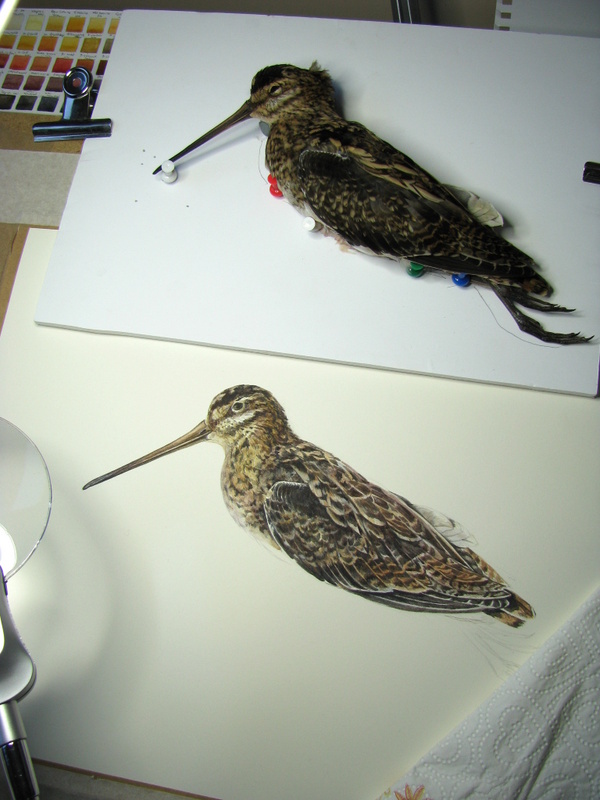 There is transience even in death, and throughout the week I noticed the subtle changes, the slow decay. I’m glad that I made the colour notes for his legs the week before because they were the first to change. By the end of the week, the snipe was no longer looking his best.
A dead bird is not the most obviously beautiful of subjects to paint, but I wanted to capture the evocative wistfulness of the moment. The Japanese believe that beauty is not inherent in an object, but only comes to into being when it is seen and appreciated.
I hope I evoked that beauty.
Another beautiful object arrived at my home this week. My friend Claire Ward sent me a stunning painting of a Scarlet tiger moth on handmade paper. Her work is exquisite- have a look at her website. It seems that like me, my friends are also stirred by the beauty and precious fragility of life.
“One’s feelings are stirred up because he understands, deep in his heart, the moving power of the moon and the blossoms. The heart that is ignorant of this moving power will never be stirred, no matter how wonderful the blossoms are and how clear the moon is in front of him.” Motoori Norinaga (1730-1801)
previous next

In praise of the Daisy