Byclare McSharry
Cardamon, Carob, Cinnamon, Cloves, Doum, Galangal, Herotodus, Kaff Maryam, Nutmeg, SBA Medicinal and Poisonous Plants Exhibition, Senna, Spice Trade, Star Anise
0
“Let food be thy medicine, and let thy medicine be food.” Hippocrates
Sometimes you find yourself painting a subject which absolutely captivates you, and this week has been one of those weeks for me.
Yes, I know I tend to get pretty excited over most of my subjects, but the spices from the Egyptian market have been a joy to paint. It’s not just the rich colours and the variety of textures that have me spellbound, I’ve been reading up about them too, and spices are quite simply fascinating.
Nowadays we give little thought to these aromatic seeds and dried roots, but once upon a time, the Spice Trade was the world’s greatest industry. In fact, the spice trade has shaped the world as we know it- empires were created and destroyed, great fortunes were made and let us not forget, it was the quest for a new spice route that led Christopher Columbus to discover America. 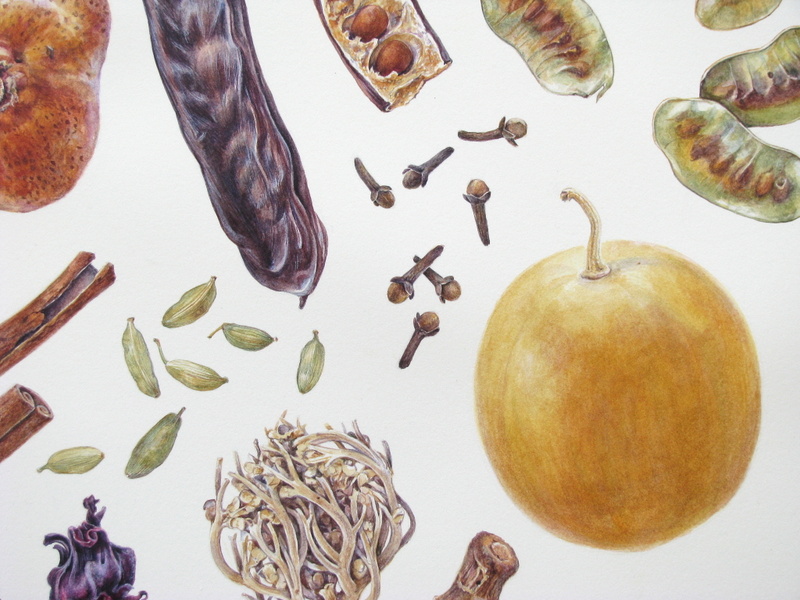 Spices come mainly from the Middle East and Asia, and for many centuries, the Arab traders dominated the market. The wonderful tale of Sinbad the Sailor was inspired by the spice trade- he was said to have been a trader of cloves and cinnamon. Spices were brought from Arabia and Asia across land by camel to Alexandria in Egypt, and from there were shipped to Europe.
Such was the value of these spices (frankincense , myrrh, nutmeg, cinnamon, cloves and peppercorns to name but a few), that the source of these spices was kept a closely guarded secret. To deter any rivals, the Arabs told fantastical tales about the dangerous creatures that the spice traders had to encounter.
Herodotus, a Greek historian in  5 BC wrote that cinnamon sticks were collected by huge and ferocious birds from an unknown land, and used to make their nests on sheer cliff faces. To get the cinnamon sticks, the Arabs would bring dead donkeys and oxen as bait. The birds would swoop down and seize the meat, carrying it up to their nests. However, the nests would not be able to hold the weight of the meat, and would fall to the ground, enabling the cinnamon sticks to be gathered by the waiting Arabs.
In fact, cinnamon is the inner bark of Cinnamomum iners , a fairly common shrub that grows in Arabia!
With all these wonderful tales, it’s no wonder that I have been enjoying painting these spices!
As this painting is for the SBA exhibition “Poisonous and Medicinal Plants” in Germany, I’ve also been researching their medicinal uses.
The spices in the market are presented in large baskets, which prompted me to paint this collection in a circular format.  Although they all differ in colour, I kept the same colour palette throughout to bring harmony to the composition. The smells were divine, always a bonus. 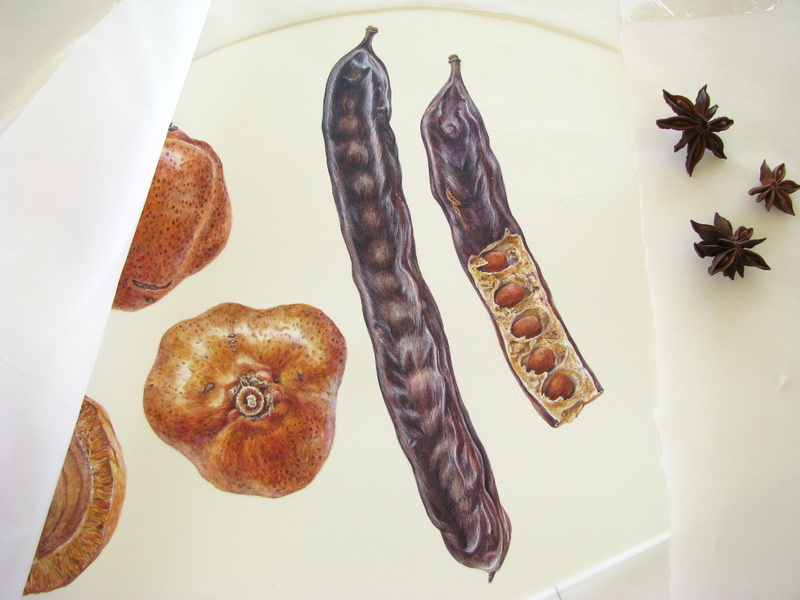 Doum fruit,  Hyphaene thebaica  It has been shown to significantly lower high blood pressure, lower bad cholesterol, and raise the good cholesterol. You can read about that here
Carob, Ceratonia siliqua    Known as “nature’s candy”, carob is a healthy alternative to chocolate. It helps to regulate the digestion process, while serving as a natural anti-allergic, antiseptic, and anti-bacterial agent. It also helps regulate blood glucose.
Star Anise Illicium verum  Traditional used in the treatment of rheumatism, star anise is also the source of one of the main ingredients of Tamiflu, used for the recent influenza outbreaks.
Senna, Senna alexandrina  is mainly used as a laxative
Cloves are the aromatic flower buds of Syzygium aromaticum. Clove oil is widely used in dental treatments for it’s anti-bacterial, anti-inflammatory and mildly anesthetic affects. In medieval times it was used to preserve meat.
Desert Gourd, Citrullus colocynth A powerful purgative with anti-inflammatory properties. Extracts from this plant are being used a therapy for the prevention of breast cancer cells
Kaff Maryam, Resurrection Plant Anastatica hierochuntica  Traditionally used for menstrual cramps and to ease childbirth. I wrote about this plant on my blog here.
Galangal Alpinia officinarum  The word “galangal” comes from the Arabic form of a Chinese word for ginger, liang-tiang. The galangal rhizomes were widely used for their stimulant and digestive effects in medieval Europe, and were said to smell of roses and taste of spice. This dried root has an important medicinal use- it contains high concentrations of the flavonol galangin, which has been shown to slow the increase and growth of breast tumor cells.
Hibiscus, karkade Hibiscus sabdariffa  Made from the dried flower calyces, this is usually made into a refreshing tea which is proven to reduce blood pressure
Cardamon Elettaria    Has antiseptic, antispasmodic, carminative, digestive, diuretic, expectorant, stimulant and tonic qualities, and is also a rich source of vitamins and minerals
Cinnamon Cinnamomum iners  has powerful anti-viral properties and has been used in the treatment of diabetes. However it has also recently been shown to inhibit the development of Alzheimer’s disease in mice
Nutmeg,  Myristica fragrans   has anti-fungal, anti-depressant, aphrodisiac, digestive, and carminative functions. It is also a good source of minerals like copper, potassium, calcium, manganese, iron, zinc and magnesium, as well as being rich in vitamins B and C and folic acid.
“All that man needs for health and healing has been provided by God in nature,
the challenge of science is to find it.” Theophrastus
previous next